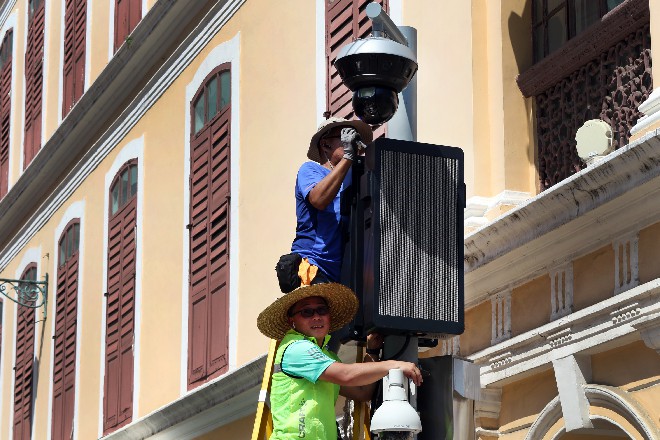 The installation of a large number of surveillance cameras by the security authorities, and the announced upgrade of facial recognition functions in many of them, were among the topics noted on the List of Issues (LOI) for Macau by the United Nations (UN) Human Rights Committee.
As Jason Chao, a representative of the Macau Research Group, acknowledged during a press conference held on Wednesday, the surveillance system raises issues regarding the right to privacy.
For Chao, more important than the existence of a surveillance system in itself is the possibility of this system being transitioned from manual operation to an automated system that immediately recognizes and traces people’s actions.
“This certainly carries a lot of constraints and works as a ‘chilling’ effect for the people in Macau,” Chao said, adding that is scientifically proven that people change their behavior when they know they are being filmed.
People’s natural expressions are also affected by surveillance and people are less likely to be willing to participate in any form of political or social intervention or demonstration. Thus, surveillance works not only restrict privacy but serve to restrict people’s expression of their will, Chao said.
Chao also highlighted that the committee’s response to the discussion of this topic is rather important as it is a “new topic” about which there is little information and almost no previous documentation or recommendations from the UN to governments worldwide on the use of such systems.
Given the introduction of facial recognition capabilities for some surveillance cameras, known as “Eyes in the Sky”, the committee is now asking what guarantees the local government can provide regarding “safeguards against the abuse of data […] and restrictions on its use.”
According to figures advanced earlier by the security authorities, the system will include a total of 2,600 cameras when completed in 2023.
The total number of surveillance cameras being installed was contested almost one year ago by pro-democracy lawmaker Sulu Sou and the New Macau Association, who discovered through a survey and the analysis of documents from the surveillance system project that the number of cameras disclosed by the security authorities was incorrectly stated.
According to Sou, the number of cameras may be much higher than initially thought, as the numbers advanced by the authorities refer to the number of locations and not of devices. Sou claims that since several cameras are usually installed in each location, the total number should be much higher than that officially announced by the Secretary for Security, Wong Sio Chak.