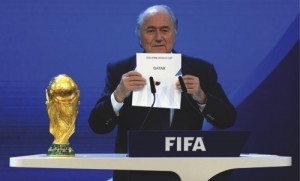 The status of Russia and Qatar as World Cup hosts seemed even more secure yesterday after FIFA dismissed ethics prosecutor Michael Garcia’s appeal against the handling of his investigation into the bidding process. FIFA said its appeals panel ruled the case “not admissible.”
The former U.S. Attorney had objected to ethics judge Joachim Eckert’s summary of the World Cup bid investigation, claiming “numerous materially incomplete and erroneous representations” of his work.
Eckert sought to close the case against all nine bidding candidates last month. He concluded that any corruption or rule-breaking was of “very limited scope” and did not influence the votes. The FIFA executive committee chose Russia to host the World Cup in 2018 and Qatar won the vote for the 2022 tournament.
It was unclear if Garcia can take his appeal to the Court of Arbitration for Sport.
Garcia filed his appeal last month only three hours after FIFA published Eckert’s report and welcomed “a degree of closure.”
However, Eckert’s report “does not constitute a decision (…) and as such is neither legally binding nor appealable,” FIFA said in a statement yesterday.
FIFA also provided further legal opinion in a background paper on its website.
“In doing so, the chairman (Eckert) had merely commented on the report of (Garcia’s) investigatory chamber on a voluntary basis,” the FIFA paper said.
The ruling was published less than one hour after FIFA announced a disciplinary committee judgment dismissing complaints by two whistleblowers who were interviewed during the probe.
The timing of the decisions — as FIFA President Sepp Blatter and his board gather in Marrakech, Morocco — will further fuel skepticism. FIFA insists that its judicial bodies are independent and not subject to any influence within its Zurich headquarters.
Still, the two rulings will help set the agenda ahead of the two-day board meeting starting Thursday, which appears weighted against reformers seeking greater transparency.
The board is set to receive a review on Friday of Garcia and Eckert’s work by Domenico Scala, the chairman of FIFA’s audit and compliance committee. Scala should decide how much of Garcia’s confidential 430-page investigation dossier should be seen by the board to decide the next steps in the case, more than four years after Russia and Qatar won their votes.
Blatter’s ruling board will then decide whether to relax secrecy rules and publish some or all of Garcia’s work.
Garcia’s legal defeat does not affect his prosecutions of five men, including former FIFA board member Franz Beckenbauer, for wrongdoing in the bid campaign.
Three current FIFA board members — FIFA vice president Angel Maria Villar of Spain, Michel D’Hooghe of Belgium and Worawi Makudi of Thailand — also face sanctions for their actions during bid contests marred by claims of bribery, collusion and favor-seeking, and the subsequent investigation.
The Russian and Qatari World Cup bid teams and organizing committees have always denied wrongdoing.
In the earlier disciplinary ruling yesterday, FIFA said the whistleblowers’ “breach of confidentiality claim had no substance.” The FIFA statement did not identify Phaedra Almajid, a former Qatar bid staffer, and Bonita Mersiades, who worked for the Australia campaign. Both worked in communications for their countries’ 2022 bids and left before the December 2010 vote.
The FIFA panel ruled that both women “had gone public with their own media activities long before” Eckert’s summary was published. Eckert’s report also did not name them.
FIFA said Garcia advised disciplinary chairman Claudio Sulser that the complaints against Eckert “were without merit.” The president German soccer federation, one of FIFA’s most influential members, spoke out yesterday against the legal turmoil.
Wolfgang Niersbach, speaking on the fringes of a news conference, said “we’ve lost track” of the judicial mess over the Garcia report.
Niersbach, who European members could elect to the FIFA board in March, said the sport’s governing body was failing to be an institution of “absolute credibility and integrity.” Graham Dunbar, Geneva, AP