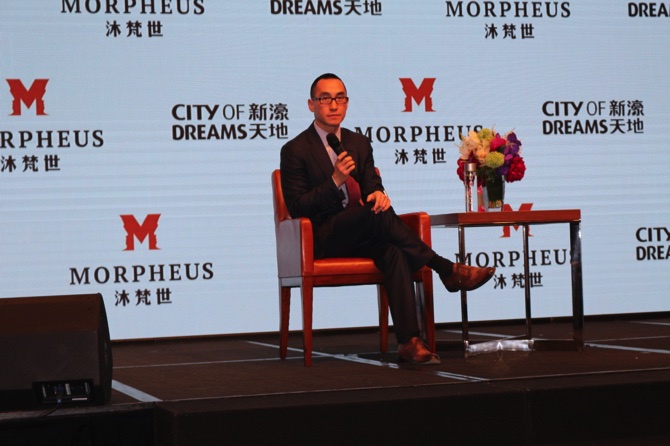 Melco Crown Entertainment is scheduled to launch its newest hotel brand at the City of Dreams. The hotel tower, a USD1 billion project named Morpheus, will open in 2018.

The gaming operator yesterday unveiled the latest hotel brand for its fifth hotel at City of Dreams, which is named after the God of Dreams and would cater to the expectations of sophisticated and high-end travelers.

The tower was designed by the late architect Zaha Hadid. It will feature some 780 rooms, restaurants, an executive lounge, a sky pool and VIP gaming and villas will be constructed at the top floors.

According to Lawrence Ho, chairman and CEO of Melco Crown Entertainment, the operator has maintained a high room occupancy (over 90 percent) in Studio City and City of Dreams.

Ho implied that the upcoming hotel would accommodate the increasing number of tourists that would enter Macau through under-construction infrastructures, citing the Hong Kong-Zhuhai-Macau Bridge.

Meanwhile, since Morpheus would feature VIP and premium mass gaming tables, Ho clarified that they would only be moving such tables from its properties.

“The casino portion is not a new casino [but] merely moving some casino tables […] from existing facilities to Morpheus [as] it’s still part of City of Dreams,” he told the press.

When questioned whether the casino floor room would feature gaming tables or slot machines, Ho answered, “It’s more likely a space for VIP and premium mass. We haven’t decided yet. It’s a small area.”

As the region’s gross gaming revenue has seen significant recovery in the last three months, the CEO hoped that the growth pattern would be stabilized. Yet he also clarified that Melco Crown is not reliant on the VIP market, noting that their focus is on expanding its premium mass market.

“In the whole of Macau we’re the second least reliant on [VIP]. […] So I’m happy that it [has] recovered but I think the driver of Macau and driver of Melco Crown for years to come is going to be based on mass,” he said.

Melco Crown Entertainment is also looking at developing Morpheus into a global brand. As there are a number of resorts globally, in terms of architecture and design, the hotels are “pretty standard looking.”

Morpheus is the first high-rise building supported by a free-form exoskeleton steel structure to house a mix of facilities within one cohesive edifice, featuring two sky bridges, five glazing systems and a non-repetitive aluminum cladding.

Zaha Hadid Architects note that the construction incorporates a number of architectural and technological breakthroughs.

Inspired by jade artifacts, no two pieces on the structure are the same. It comprises two towers with a total of 39 floors, connected at both the podium levels and the roof.