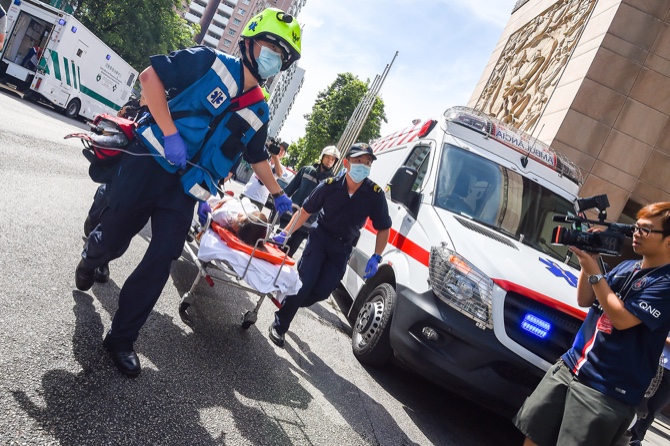 A third-floor apartment situated in Rua do Dr Pedro Lobo caught fire early on Friday morning, forcing the evacuation of some 40 residents from the building.

Twelve evacuees were sent to the hospital after excessive smoke inhalation, including nine Filipino residents who were living in the apartment.

The youngest member of the affected family is four years old, while the oldest is 62.

The incident has been a rallying call for the Filipino community in Macau, which has banded together to offer the family assistance.

According to Inna Angeles, a relative of the family, the apartment occupants escaped the fire without taking any belongings.

“They don’t have anything at all, [not] even their documents,” she said.

Yesterday, Angeles told the Times that her family had felt some pressure from the landlord to conduct a clean-up of the apartment, however the Fire Services Bureau advised not to throw away any residual materials in the apartment pending further investigation.

The fire broke out at around 3:30 a.m. and spread quickly.

“According to the assessment, it was explained that it came from the electric plugs at home […] but they did not have any Christmas lights,” Angeles explained.

According to Angeles, nine of her family members are still in trauma following the loss of their home.

Five members are local residents, while the other three are non-resident workers. One of them is on a tourist visa.

Angeles said that the Philippine Consulate had already initiated assistance in regards to the processes of their lost documents, and the family had received support from the Filipino community.

“Almost the whole Filipino community is helping and reaching out to us, and is also assisting us,” she said.

Angeles also noted that they are set to meet with the fire brigade services today to acquire the final investigation reports.  LV