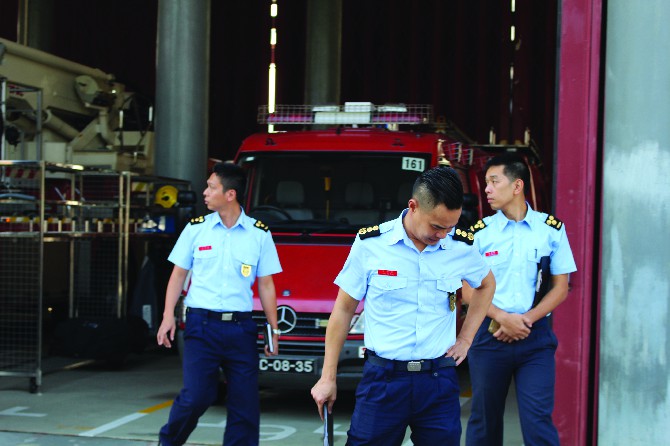 The local government has purportedly decided to review a specific article of the recently approved fire safety law in order to reconcile potentially overlapping contracts, according to the Second Standing Committee of the Legislative Assembly (AL).
Yesterday, the Second Standing Committee of the AL had the third meeting to discuss the fire safety law, which lawmakers approved in November last year.
The AL Second Standing Committee’s discussion focused on five articles, in particular from the 27th to the 31st, which mostly concern responsibilities for fire system technology problems, as well as conflicts of interest and transparency concerning fire services contracts.
According to the law, a contractor responsible for drafting a fire safety plan, for providing the concerned fire system installation service, or for supervising the concerned project before the government issues an approval of utility to the building, is banned from participating in the inspection, testing and other maintenance of the same building after the utility approval is issued.
However, another prescription explicitly requires the planning, installing or supervising contractor (first contractor) to be held responsible for technical problems incurred within two years.
The government aims to ensure transparency by prescribing the aforementioned article, but some members of the AL Second Standing Committee have raised questions anticipating potential prolonged lawsuits led by this specific regulation.
Summarizing the lawmakers’ questions, Chairman of the AL’s Second Standing Committee Chan Chak Mo pointed out that the two articles could create a scenario in which the first contractor is still bound to provide maintenance services in accordance with the contract, whereas there must be another contractor involved to provide a service.
In the scenario Chan pointed out, there may be two contracts covering the same subject matter simultaneously. Such a situation could lead to multiple legal disputes.
The fire safety law is designed to give the government authority more power over fire safety issues.
The law also prescribes that personnel from the Land, Public Works and Transport Bureau (DSSOPT) and the Fire Services Bureau (CB) are entitled to enter most buildings and breach a location without a warrant issued by a court, or without issuing an advance notification to the concerned parties.
However, there are some exceptions. DSSOPT and CB officers must be in possession of a warrant issued by a court, or must have the consent of the concerned parties before entering a residential building, a law firm or a medical clinic. The government is considering in these cases that law firms and medical clinics are in possession of important client records.
This specific explanation was not well comprehended by some lawmakers, who believe that other locations, including engineering companies, also hold important documents.