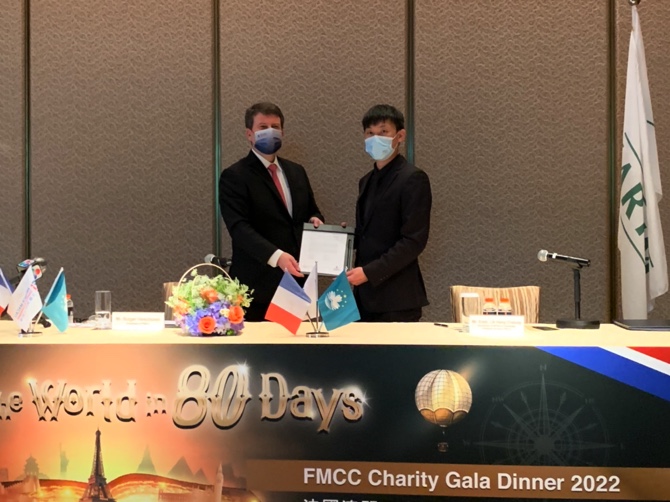 The France Macau Chamber of Commerce (FMCC) 2022 Charity Gala Dinner, to take place on March 25 at MGM Macau, will be themed “Around the World in 80 Days.”

FMCC has partnered for the first time with the Association of Rehabilitation of Drug Abusers of Macao (ARTM) to launch the organization’s “Alcohol Abuse Awareness Campaign” to raise awareness of the abuse of alcohol in Macau.

At a press conference held yesterday, ARTM statistics were quoted showing that there has been an increase in alcohol consumption among residents when compared to pre-pandemic times.

Therefore, FMCC noted that it is “vital for the society to have a program in place that provides professional counseling when a crisis point is reached with accessible aftercare, to foster holistic means of recovery.”

“It’s a good timing that we [are giving] extra attention to this service,” said FMCC chairman Rutger Verschuren.

At this year’s gala, guests will be immersed in one of French novelist Jules Verne’s most famous works in his series of Voyages Extraordinaire, named “Around the World in 80 Days,” and embark on a thrilling night filled with spectacular entertainment and cuisines, indulging in the delights and beauty of our extraordinary world.

Speaking to the press, Verschuren said that the chamber is aiming to raise no less than MOP60,000 to support ARTM’s project.

“It’s always a crystal ball, but we aim for MOP60,000 or maybe MOP70,000. We always try to have raffle tickets. We also auction items made by people connected with ARTM. Our internal objective is not less than MOP60,000 but hopefully a lot more,” he said.

The FMCC Charity Gala Dinner 2022, packed with a culinary and entertainment program as has been the case in the past 13 years, is expected to be attended by many community and business leaders in Macau and the Greater Bay Area.