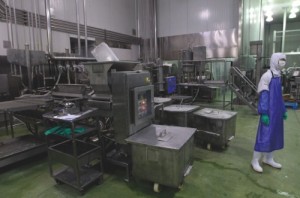 A worker stands near a shut down machine at the workshop Husi Food Co. in Shanghai

A grassroots group petitioned at a McDonald’s canteen in Avenida de Horta e Costa, asking McDonald’s Macau to explain the Husi incident to the public.
“As a big fast-food chain in Macau, McDonald’s is liable for guaranteeing consumers’ rights. (…) It should explain the incident to the public. If these imported products really contain the expired meat, what will they do?” said Lee Kin Yun, a representative from the Labor Party formed by several workers’ groups. Petitioners said that they would also send a letter to the Food Safety Center of the Civic and Municipal Affairs Bureau (IACM): “IACM works passively. It only took action when the scandal was revealed. If the media had not disclosed the incident, the organization would have done nothing.”
McDonald’s Macau had earlier explained in a statement that the Civic and Municipal Affairs Bureau has already suspended the importation of all products from Husi China. This suspension, the company said, will only affect the availability of the McCrispy Chicken Burger. “McDonald’s Macau always strictly follows all food safety regulations and standards set by the Macau government. At this point, since IACM suspended importation of HUSI products from China, we no longer use any HUSI products in our Macau restaurants,” the company stated earlier this week. The statement followed IACM’s announcement that Husi supplied 576 kilograms of “Frozen Fully Cooked Crispy Chicken” to McDonald’s Macau in June.
Some 43.3 percent of Chinese netizens commenting on the country’s latest food safety scandal have directed their anger towards poor supervision, according to a report in Wednesday’s China Youth Daily.
According to the report, the analysis, undertaken by the major daily paper’s research department, was based on 2,000 posts taken as a random sample between Sunday and Tuesday from approximately 1.6 million posts on social media. Many Internet users are looking to harsher legislation as a solution, with 20.1 percent of the analyzed posts calling for harsher penalties for food crimes.
On Sunday, a Shanghai TV station exposed Shanghai Husi Food Co., Ltd., a supplier to a fast food chains including McDonald’s and KFC, for having sold products containing expired meat. Shanghai police said on Wednesday that they have detained five people involved in the scandal.
McDonald’s Macau had admitted to using products provided by Shanghai Husi Food Co Ltd, the company shut down by mainland food safety authorities.
Yesterday, a bill for the revision of the Food Safety Law was tabled for its first reading at China’s top legislature. It outlines harsher sanctions for offenders and a stricter food safety supervision system. For instance, the bill suggests raising the fine for offenders to up to 30 times the value of their products.
After Chinese authorities shut down OSI’s Shanghai Husi Food plant this week for allegedly selling expired products, McDonald’s said that it will continue to use the Husi division’s other operations in the country. While McDonald’s transitions to a “state-of-the-art facility” in Henan, it plans to rely on Husi’s Hebei plant.
“We and our suppliers have a decades-long proven track record of providing safe, quality food to our customers worldwide,” said the Oak Brook, an Illinois-based chain, in a statement. “Husi is taking swift action by investigating what happened and overhauling its safety procedures. We have been in direct contact with OSI’s global leaders; as an added assurance of uncompromised safety, they are sending their top food safety experts to China to provide expertise on operations.”
This move provides a contrast to the reaction of Yum, the largest fast-food business in China. The company, which owns Pizza Hut, KFC and Taco Bell, terminated its relationship with OSI after a government probe into the alteration of expiry dates. MDT/Agencies