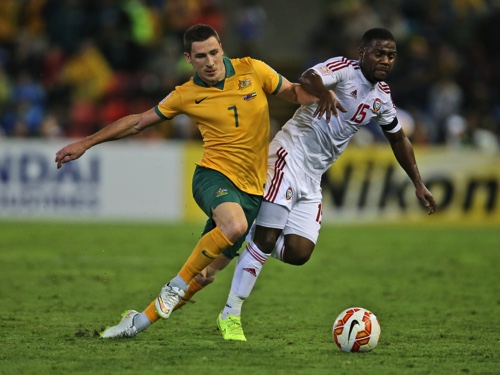 Australia remained on course for its maiden Asian Cup title after defeating United Arab Emirates 2-0 in a semifinal at Newcastle Stadium on a wet day.
Playing in Newcastle for the first time in almost 20 years, the Socceroos took a firm grip on the contest when defenders Trent Sainsbury and Jason Davidson punched in their first international goals inside the first 15 minutes.
“Our intention was we wanted to start really strong,” Australia coach Ange Postecoglou said. “We thought if we can get through that early period with not conceding and possibly with the bonus of scoring, then we could control the game after that.”
Australia march on to the final against South Korea at Sydney on Saturday, when the host hopes to go one step better than its 2011 final loss to Japan. South Korea beat Australia 1-0 in the group stage 10 days ago.
“For us to be there is a fitting way to end a fantastic tournament,” Postecoglou said. “You can always dream if we win it, it will be one of the biggest games (in Australia) ever.”
UAE, which knocked out defending champion Japan 5-4 on penalties in the quarterfinals, couldn’t find a breakthrough to spark a fightback, despite another leading performance by star Omar Abdulrahman.
UAE faces Iraq in the third-­place playoff at the same venue on Friday.
Australia and the UAE had never met in a competitive match, and their last two friendlies ended in scoreless draws, but the host needed only three minutes to make a dream start.
Massimo Luongo’s corner was met by Sainsbury, who took advantage of some slack marking to guide in his header.
Australia’s eagerness to dominate midfield in the first half was best epitomized by Robbie Kruse, who dispossessed Abdulrahman while missing one of his boots.
Kruse created the next Australia chance when the winger’s dinked cross fell close to Tim Cahill. In the ensuing scramble, Mathew Leckie’s shot was blocked, but Davidson’s follow-­up shot slid past goalkeeper Majed Naser to double their advantage in the 14th.
Davidson became Australia’s 10th different scorer of the tournament.
“We can score goals from anywhere,” Postecoglou said. “We knew, if we played our style of football and got players in the positions where we can score, including set-­pieces.”
Ahmed Khalil, who was UAE’s most impressive player in the first half, fired a warning of UAE’s strength in attack when his shot from a low cross hit the outside of the post.
UAE started the second half better than the first, with Abdulrahman getting on to the ball increasingly more in threatening areas, but Australia goalkeeper Mat Ryan was rarely tested.
“We tried our best to come back into the game but it was not easy,” UAE coach Mahdi Ali said.
“We played three strong matches; Iran, then Japan, then Australia. Many players were tired, and we didn’t have enough power to come back into the game.”
Cahill, who was largely contained by the defense, was withdrawn for Tomi Juric just after the hour by Postecoglou, who may have had thoughts of keeping his talisman fresh for the final.
A concern for Postecoglou, though, will be the fitness of left back Ivan Franjic, who appeared to injure his groin late, when Australia had already used its three substitutions.
“We’ll see how he cools down,” Postecoglou said. “But it’s a final of a major tournament, and I reckon unless they chop his leg off he’ll put his hand up to be part of it.” Keiran Smith, Newcastle, AP