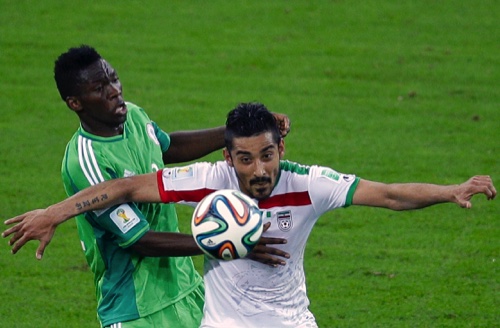 Iran’s Reza Ghoochannejhad, right, challenges for the ball with Nigeria’s Kunle Odunlami l during the group F World Cup soccer match between Iran and Nigeria at the Arena da Baixada in Curitiba, Brazil

Iran and the United Arab Emirates can all but assure themselves of advancing to the quarterfinals, while Bahrain and Qatar are playing to survive in Group C today.
Here’s some things to watch:

QATAR VS. IRAN (5pm): Three-time Asian Cup champion Iran showed why it’s the favorite to top Group C after a powerful display of speed and strength against Bahrain.
2014 Gulf Cup champion Qatar, meanwhile, will need to draw on all its resolve to recover from an error-riddled 4-1 loss to the United Arab Emirates, when mistakes by goalkeeper Qasem Burhan contributed to at least two goals.
Ehsan Hajsafi was the standout for Iran in its 2-0 win in Melbourne.
The Iranians will be the clear favorites to beat Qatar in Sydney, but recent history shows it will not be a formality.
Iran has lost just once to Qatar in 10 matches since 2007, but the fact that five of them ended in a draw is a more telling statistic.
Thursday’s game will be just the second time the two teams have met at the Asian Cup. Iran won the previous match 2-0 in 1988.
Despite the background, Iran coach Carlos Queiroz said Qatar would start as favorite following its title in the recent Gulf Cup.
“We know that we face a well-prepared and motivated Qatar team after their success in the Gulf Cup,” he said. “Queiroz said. “We aim to be the best team on the pitch and win the match.”
Iran’s star striker Reza Ghoochannejhad says while his side is under a lot of pressure to continue to perform at the tournament, it is ready for the challenge.
“Everybody is excited to play against Iran, and everybody is motivated, especially because we are coming from the World Cup, but this is the situation right now we can’t complain, we can’t make excuses,” he said.
Iran has lost just one of its past 15 Asian Cup matches, winning nine.

BAHRAIN VS. UNITED ARAB EMIRATES (3pm). Fresh from a 4-1 win over Qatar, the United Arab Emirates will be virtually assured of a quarterfinals spot with a win over another Gulf rival Bahrain in Canberra.
The win will be no formality, however, after Bahrain put up a spirited challenge to regional powerhouse Iran in a 2-0 loss at Melbourne on Sunday.
The UAE and Iran share the Group C lead with three points each after their opening wins.
Ahmed Khalil and Ali Mabkhout scored two goals each in the UAE’s dominant opening performance, while playmaker Omar Abdulrahman was dangerous in midfield.
“This was the key game for us,” UAE coach Mahdi Ali said. “The first step gives players motivation and confidence for the second game … from tomorrow we work harder.”
Bahrain striker John Okwunwanne constantly troubled Iran in their opener, and Sami Al Hussaini demonstrated that he won’t be overawed by the tournament’s big name players.
In the six matches they’ve played against each other since 2004, the UAE has won the past three, while Bahrain has won two.
UAE has never won its opening two games at an Asian Cup. Neil Frankland, Melbourne, AP