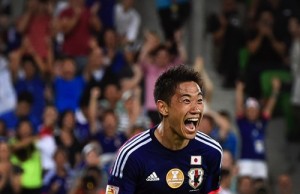 Keisuke Honda and Shinji Kagawa scored as Japan weathered a determined Jordan to win their final group match 2-0 and advance to the Asian Cup quarterfinals yesterday.
Iraq also qualified from Group D after Younis Mahmoud and Yaser Safa Kasim gave it a 2-0 victory over already-eliminated Palestine in Canberra.
Group-winner Japan will next face the United Arab Emirates on Friday, when Iraq plays Iran.
Honda opened the scoring in the 24th minute when he coolly slotted the ball home at the near post after a powerful shot by Shinji Okazaki was deflected by Jordan goalkeeper Amer Shafi.
Kagawa put the win beyond doubt eight minutes from the end, meeting a long centering pass in front of goal and firing in. AP