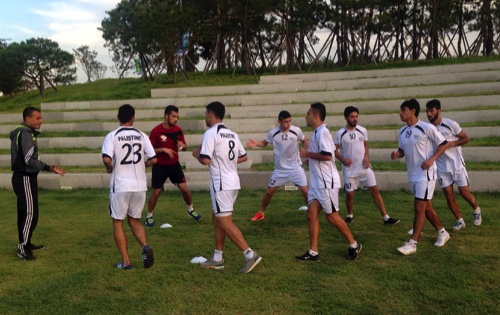 While it didn’t generate anything remotely like the attention of Germany’s 7-1 thrashing of Brazil at the World Cup, the Palestinian team’s 1-0 victory over the Philippines in the AFC Challenge Cup final may have been one of the most significant international football results of 2014.
The teams, both outside the top 100, met at the Maldives in May, with the winner guaranteed a spot at the Asian Cup. And so it was a momentous win for the fledgling Palestinian team.
And that set the newcomers on course for a big debut against defending champion Japan at Newcastle, Australia, next Monday.
While the Palestinians are outsiders against continental heavyweight Japan, subsequent group games against Iraq and Jordan will likely be more important in determining whether the Cup rookies can surprise a continent by making the last eight.
“Japan is the best team in the group,” coach Ahmad Al Hassan said after arriving in Australia. “The chances of the other three teams, however, are equal and we will be trying our best to get the best results for Palestine.”
Following victory in the AFC Challenge Cup, the Palestinians performed strongly at the Asian Games; a largely under-23 tournament that features more countries than any other Asian competition. The Palestinians had never won a game at previous Asian Games, but in South Korea they topped a group containing Tajikistan, Singapore and Oman. Finishing first was rewarded with a second-round match against Japan, resulting in a 4-0 defeat.
The senior squad was in good form leading into the trip Down Under, with wins over Taiwan, India, Pakistan and India in friendlies, a 0-0 draw with China and a 1-0 loss to Uzbekistan.
There have been issues. Not only will the team be without the injured Swedish-based midfielder Imad Zatara in Australia, but Jamal Mahmoud quit as coach in September after three successful years in charge for reasons that are still not completely clear. Al Hamad, who had spent the previous two years as technical director for the national federation was appointed as the replacement.
On top of the changes and challenges of working with limited facilities, the team must constantly deal with the political and security difficulties at home.
All but six players in the 23-man squad are based in the Palestinian territories. Holding training camps and traveling overseas has been problematic due to difficulties obtaining permits. The Palestinian federation has complained about Israeli travel restrictions on some of its players in the West Bank and Gaza Strip, a territory ruled by the Palestinian Islamic militant group Hamas.
Israel has cited concerns about possible attacks by Palestinian militants as the main reason for sweeping restrictions on movement that affect most Palestinians, including athletes.
To be competitive, much depends on the experience of the Palestinian players who live abroad. Ashraf Nu’man, who scored the only goal of the AFC Challenge Cup final against the Philippines, plays for Al Faisaly in Saudi Arabia.
“Arab football has improved a lot in the past 10 years, the situation is better in this area than in East Asia and this is our dream to go to the World Cup,” the Nu’man told Australia’s SBS network. “We watched how the Algerian side played in the World Cup at a high level and no-one expected that; this is the big dream for us and at the same time it’s not impossible.”
Avoiding defeat in the opening game against Japan would be considered a major success. The big game comes against 2007 champion Iraq, a talented but unpredictable team — as it demonstrated when finishing bottom of its group during November’s Gulf Cup. That failure led the Iraqi FA to hire a new coach.
Following that is a group game against Jordan, also getting to grips with a new coach. Former English international Ray Wilkins, a one-time midfield star for Manchester United and Milan, was appointed in September. John Duerden, Sports Writer, AP