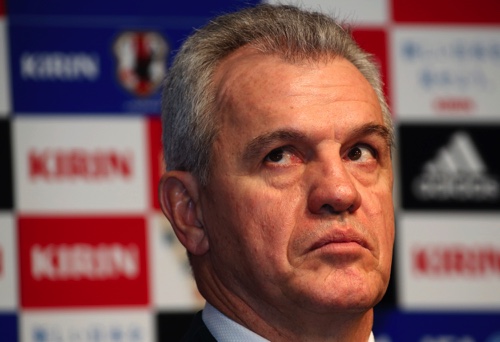 With the start of the Asian Cup only weeks away, a wide-open tournament has become even more unpredictable after a rash of coach firings in recent months left many of the top teams in disarray.
Only six of the 16 teams in the tournament that starts on Jan. 9 in Melbourne have the same coach they started the year with.
Japan and South Korea appointed new coaches following dismal World Cup campaigns that saw both finish last in their groups.
Javier Aguirre was hired in August to replace Alberto Zaccheroni as coach of defending Asian Cup champion Japan, but the former Mexico coach has since become embroiled in a massive match-fixing probe launched by Spain’s state prosecutor in the Spanish league. Aguirre denies any wrongdoing.
South Korea, meanwhile, named former Real Madrid midfielder Uli Stielike to replace Hong Myung-bo as coach in September. He’ll be attempting to bring the continental trophy back to South Korea for the first time since 1960, but his squad is coming off a 3-1 loss to Costa Rica in a friendly in October.
Things aren’t much more stable in western Asia. Following last month’s Gulf Cup, a biennial tournament played among the eight teams in region, four more teams fired their coaches — Kuwait, Iraq, Saudi Arabia and Bahrain.
Bahrain’s coach had the shortest tenure of them all. Adnan Hamad, one of Asia’s most experienced coaches, was appointed in August only to be fired three months later after his team failed to advance to the knockout stages of the Gulf Cup.
“Of course, (firing the coach) is not ideal and historically it hasn’t really proved to work,” said Anthony Hudson, the English coach who led Bahrain before Hamad took over. “The reality is there is very little time to shape and organize the team.”
Kuwait started the Gulf Cup promisingly, but fired Brazilian coach Jorvan Vieira following a 5-0 loss to Oman. Vieira, who led Iraq to the 2007 Asian Cup title, was replaced by former Tunisia midfielder Nabil Maaloul.
Kuwait is in perhaps the toughest group at the Asian Cup, alongside host Australia, South Korea and Oman.
“Our group at the Asian Cup is very difficult,” Maaloul said. “However, we want to put in a good performance at the Asian Cup, as we will not be there just to take part.”
Saudi Arabia has changed coaches more than 20 times since reaching the second round of the 1994 World Cup. At nearly two years, Juan Lopez Caro lasted longer than most but finally was let go after losing the final of the Gulf Cup in Riyadh to Qatar.
On Monday, Romanian coach Cosmin Olaroiu, currently in charge of United Arab Emirates club Al Ahli, said in Abu Dhabi he will take the Saudi job.
Iraq fired Hakeem Shaker following a last-place finish in its group at the Gulf Cup last month. The 2007 Asian Cup champions are still searching for a replacement after a potential deal with Sebastiao Lazaroni, who coached Brazil at the 1990 World Cup, fell through.
Even North Korea has had problems of late. The team’s coach, Yun Jung Soo, was punished by the Asian Football Confederation after criticizing the referees following his team’s loss to South Korea in the final of the Asian Games in October. He has been banned from entering the stadium on match days at the Asian Cup, though he can take part in training sessions.
Host Australia is still getting used to its new coach as well. Since Ange Postecoglou was hired to the position last October, the Socceroos were knocked out in the group stage of the World Cup and have won only one of their last 10 matches.
Asia’s in-form team at the moment is Qatar, which defeated Saudi Arabia to take the Gulf Cup title and recently defeated Australia and Uzbekistan in friendlies.
“We have big ambitions and this competition is a new step for us in a long-term project,” Qatar coach Djamel Belmadi told FIFA.com. “Every competition is unique and we’ll give everything to be up to the challenge.”John Duerden, AP