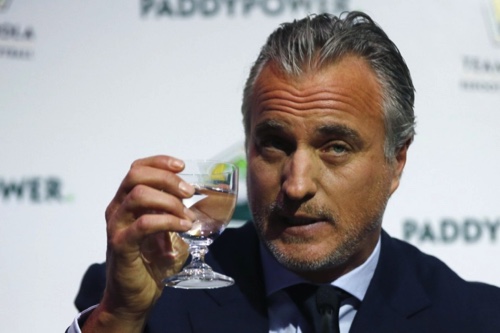 Even if David Ginola gains the nominations required by Thursday’s deadline to stand against Sepp Blatter, his improbable bookmaker-funded campaign could be scuppered by FIFA’s gambling rules.
Ginola’s campaign is being organized by stunt-prone Irish bookmaker Paddy Power, which is paying the former France international 250,000 pounds (USD375,000) to seek the FIFA presidency.
And ahead of Thursday’s deadline to enter the race, FIFA has issued an election guide that stresses that official candidates are bound by its ethics code. One regulation, designed to protect the integrity of football, states: “Persons bound by this code shall be forbidden from taking part in, either directly or indirectly, or otherwise being associated with betting, gambling.”
Asked if the betting rule applied to presidential campaigns, FIFA told The Associated Press yesterday: “It will be part of the eligibility assessment of prospect FIFA presidential candidates by the Ad-Hoc Electoral Committee in accordance with the electoral regulations.”
Ginola’s activities would only fall under the code if he gained five nominations from FIFA’s 209 national federations by Thursday.
Asked about the betting rule, Paddy Power said in a statement to the AP: “Both the heading and the content of the rule clearly relate to the integrity of football matches and competitions.”
It did not respond to further questions on the issue.
Ginola is yet to gain the public backing of a single federation since launching his campaign on Jan. 16 at a chaotic media conference, where he struggled to answer questions about FIFA and Paddy Power branding featured heavily.
After the bookmaker was questioned about its role in the campaign, the company said it will stop contributing financially before the deadline.
“Paddy Power assisted by getting this campaign off the ground in the run up to Ginola getting on the ballot and will not be contributing financially beyond 27th Jan,” the company said.
The TeamGinola.com website currently says campaign cash is being held by Rebooting Football — “a subsidiary of Paddy Power plc, who is the primary sponsor of the Campaign.”
The crowd-funding website says it is trying to raise 2.3 million pounds ($3.4 million) by Feb. 28 — by which time the former Paris-Saint Germain and Tottenham winger would hope to be several weeks into the official FIFA campaign period.
“We have always been clear this needs to be a fan-backed campaign,” Paddy Power said. “Indeed crowd funding is required to continue campaigning once he is an official candidate.”
Ginola’s website says that “pledges are non-refundable,” even if he does not make it onto the FIFA ballot.” But Paddy Power now insists “in case David doesn’t make it through, we will look to fully reimburse fans who have donated to the campaign.”
As well as gaining five nominations, Ginola has to prove to FIFA that he has carried out an active role in football in two of the last five years.
The 47-year-old Ginola will be relying on his consultancy work for French amateur club Etoile Frejus, which plays in the third tier. Club president Alexandre Barbero told the AP that Ginola worked with him “mainly over the phone” over the past six years and is unpaid.
Blatter is seeking a fifth four-­year term as FIFA president in the May election. Rob Harris, Sports Writer, London, AP