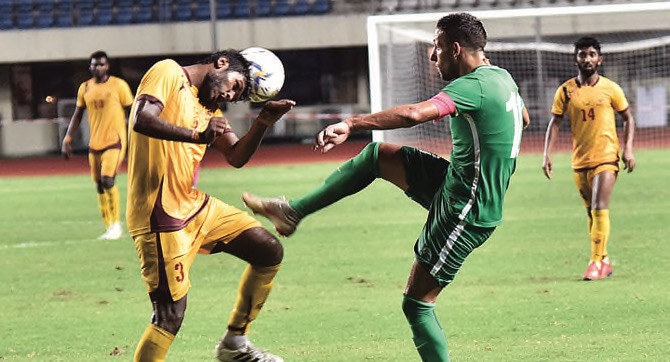 The Football Association of Macau (MFA) has decided not to depart for Sri Lanka to play their second-leg away match against the country, which was to be played tomorrow as part of the joint qualifier for the 2022 World Cup and 2023 Asian Cup tournaments.

The MFA announced the decision Saturday evening, claiming that it was made due to the state of emergency in Sri Lanka.

In response, several footballers on the team have threatened to never play again if they are not allowed to participate in the match.

A press conference was hosted by lawmaker Sulu Sou and the New Macau Association to draw attention to the issue.

The MFA explained its decision, citing the several terror attacks that took place in the island-nation about two months ago, over Easter. There have been no new terror attacks in Sri Lanka since then.

About a dozen Team Macau players petitioned the MFA, expressing their desire to play the match. They claimed that if the MFA would not listen to the players, each of them would never represent Team Macau again.

During the press conference yesterday, five team members said that the MFA had not discussed the decision with team members. They also recalled the fact that the team played against Iraq on their home ground in 2002 and did not think Sri Lanka would be any more dangerous.

The local football management body said that it had been in touch with the Football Federation of Sri Lanka (FFSL), the Asian Football Association (AFA), and the International Federation of Association Football (FIFA) to discuss the possibility of moving the match to neutral ground. According to the MFA, the FFSL, the AFA and FIFA turned down the suggestion.

The MFA decision has stirred up questions from both players and local citizens. Many citizens expressed on social media that there is no reason not to go, especially when the team is leading with one goal from their home match. A petition on social media was started, urging the AFA and FIFA to reschedule and relocate the match to neutral ground.

In response to the online petition, the FFSL issued an announcement over social media on Saturday night to explain that both the AFA and FIFA had approved the safety measures proposed by Sri Lanka. The country has also pledged to employ the highest security standards for Team Macau.

FIFA also provides insurance to teams playing in FIFA- accredited matches, which means a lack of insurance is not likely to be the cause of the MFA’s decision, as some have suggested.

Four years ago, the Hong Kong football team played a match of a similar level in the Maldives, which had also declared a state of emergency. The team made special arrangements to play the match, such as arriving and leaving the country on the same day. Staff reporter