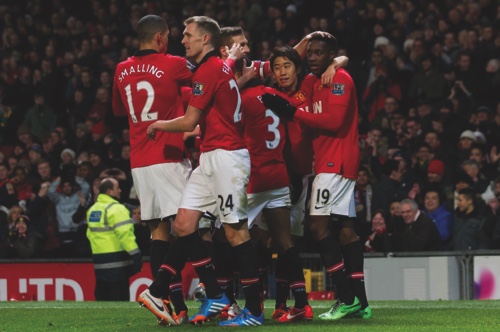 Liverpool’s group-stage exit from the Champion League marked a new low in a disappointing season so far for one of the giants of English football.
Things could be about to get even worse.
Manchester United can deal its fierce rival another blow when the country’s two most decorated clubs meet at Old Trafford on Sunday for what is widely regarded as the marquee fixture on the English calendar.
In last season’s Premier League, United’s decline was as stunning as Liverpool’s rise to second place under Brendan Rodgers. Now the opposite is true.
Far from in top form, United is seeking a sixth straight win to continue what could yet be an unexpected challenge for the league title with Chelsea and Manchester City. Liverpool is languishing in ninth place, dropped out of the Champions League on Tuesday and is looking a shadow of the side that wowed the Premier League with its attacking verve in 2013-14.
Chelsea leads by three points ahead of a home match against Hull tomorrow, while second-place City travels to last-place Leicester.

Barely six months after being hailed for reviving a fallen power, Rodgers is under increasing pressure at Liverpool.
“Across the board, we have been looked at and analyzed,” Rodgers said after Tuesday’s 1-1 draw against Basel that eliminated Liverpool from the Champions League. “For us, the solution is simple: We have to be better in our performance level … but we have to realize where we have come from.”
Last season’s second-place finish perhaps placed unrealistic expectations on the Reds but they have still been a major disappointment.
With Daniel Sturridge out and his replacement Mario Balotelli also injured, it is hard to imagine Liverpool repeating its 3-0 win over United at Old Trafford in March.
“We need to get our main striker Daniel Sturridge back and get some more goals in the side,” Liverpool captain Steven Gerrard said.
Could Man United muscle in to the Premier League title race? It would have seemed highly unlikely just a month ago, but the 20-time champions should not be counted out.
Eight points behind Chelsea and five adrift of City, United is getting results despite falling below the standards demanded by manager Louis van Gaal. Just imagine what could happen if the team starts to hit form.
With no European football to clog up its schedule and out of the League Cup early, United’s campaign has echoes of Liverpool’s last season when Rodgers benefited from having a whole week to prepare for league games.
“It’s fantastic to be third in the table,” Van Gaal said after Monday’s unconvincing 2-1 win at Southampton, “but I had hoped we would manage that with a better performance.”

By beating Roma 2-0 away on Wednesday to qualify for the last 16 of the Champions League, Man City continued on a rich vein that has seen the team win its last six games in all competitions.
It also showed that talk of City being a one-man team is wide of the mark.
Sergio Aguero is set to be out for up to six weeks with a knee injury, depriving City of its top scorer and biggest attacking threat.
Fellow strikers Edin Dzeko and Stevan Jovetic are back fit, though, as is playmaker David Silva, while midfielders Yaya Toure and Samir Nasri have chipped in with goals in recent matches.
Playing with a belief that was lacking a month ago, City will be confident heading into likely relegation candidates Leicester, Crystal Palace, West Bromwich Albion, Burnley and Sunderland over the next three weeks as it looks to keep the pressure on Chelsea. Steve Douglas, Sports Writer, Manchester, AP / Odds by Betfair