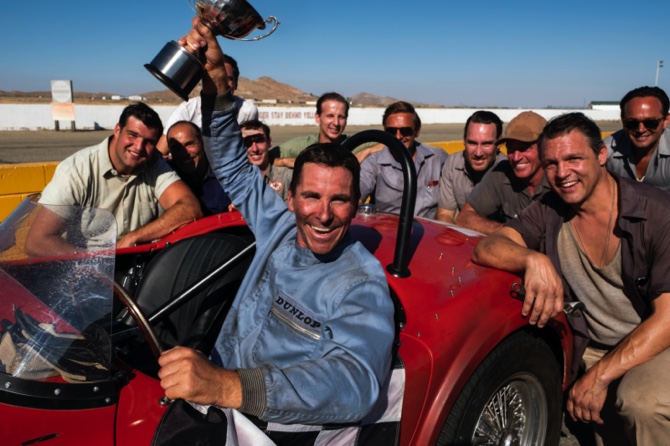 Christian Bale in a scene from “Ford v. Ferrari,” showing in local theaters

Cops might do well to position their speed traps near movie theaters wherever the new film “Ford v Ferrari” is playing. They might fund their whole year’s budget busting speeders peeling out of the parking lots.

This infectious and engrossing story of the 1966 showdown on a French racetrack between car giants Ford and Ferrari is a high-octane ride that will make you instinctively stomp on a ghostly gas pedal from your movie seat.

But you don’t need to be a motorhead to enjoy Matt Damon and Christian Bale as a pair of rebels risking it all for purity and glory. Yes, director James Mangold takes you down onto the raceway, with cameras low to the ground and care to show the crack of gear shifts and feet on pedals.

Yet he’s not created a “Fast and Furious” film — this is more a drama about a pair of visionaries who fight against a smarmy bureaucracy. That vision happens to be on a track.

The first three-quarters of “Ford v Ferrari “ sets the stage for the furious 40-minute restaging of the exhausting Le Mans race — a 3,000-mile, 24-hour slalom through country roads. So meticulous have the filmmakers been that they built an entire accurate Le Mans in Georgia because the original has been too altered in the intervening years. (There are not many cases when Georgia acts as a stand-in for La France.)

Damon plays the legendary American driver and car designer Carroll Shelby, who won Le Mans in 1959 but gets sidelined from driving due to a bad heart. He considers the best driver in the world to be Ken Miles, a daredevil British missile played by Bale.

If Damon is a bad boy, then Bale is a bad-bad boy, a role perfectly in his wheelhouse, another intense, almost-over-the-top role. But it’s Damon, almost subdued with little fireworks necessary, who shows real compassion as a man caught between corporate responsibility and honor.

Le Mans by the mid-60s was a plaything of Ferrari, which dominated year after year. Lee Iacocca, then an executive with the Ford Motor Company, convinces his boss, Henry Ford II, to enter the racing world and win Le Mans — not necessarily for glory but to make the company appealing to young buyers.

Ford initially tries to do that by just buying Ferrari — but Italian head Enzo Ferrari tells the Ford delegation to “go back to Michigan, back to your big ugly factory.” Boo! That naturally ruffles the feathers of Henry Ford’s son (Tracy Letts, lighting up every scene with unpredictable energy) and so Ford is now ready to build its own race team.

The screenwriters Jez Butterworth, John-Henry Butterworth and Jason Keller have fleshed out the tale with glimpses into the personal costs to Miles’ family (the enchanting Caitriona Balfe as his wife and their young son.) Their quiet moments at home may be a little hokey but are a welcome relief to the roar of the track. You can tell the writers have some stage chops with tight scenes that build to great lines. “Go to war, Carroll!” Henry Ford II bellows to Shelby.

Many of the songs we hear are well placed — it’s got a soundtrack of The Animals, The Sparkles and The Quarrymen — plus, you’ll marvel at another past technology: Sunglasses in the 1960s would make anyone look cool.

Perhaps the only thing overshadowing the two Oscar-winning lead actors in this film are the cars. They’re truly drool-worthy. But be gentle on your gas pedal on your way home.