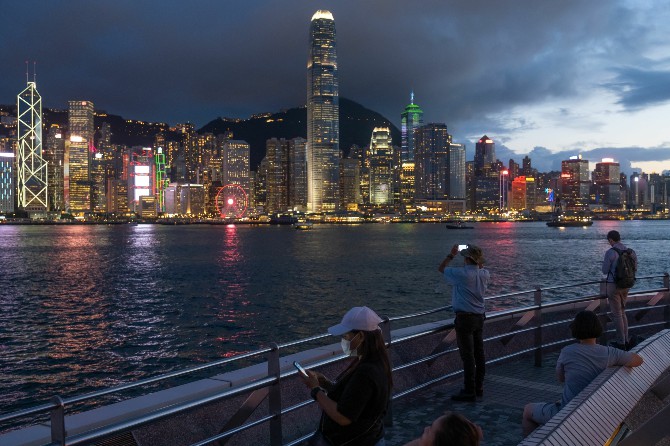 Multinational companies surrendered more office space in Hong Kong last quarter as the economy deteriorated amid the pandemic, pushing the city’s vacancy rate to the highest in 15 years, according to Cushman & Wakefield Plc.
Foreign companies made up of 61% of the total surrender of office stock in the second quarter, up from 47% in the previous quarter, the property agency said in a briefing with reporters Tuesday. Cushman didn’t name any of the firms vacating space.
“There’s no particular area or one type of industry, it’s fairly widespread,” said Keith Hemshall, head of office services in Hong Kong at the firm. “That really is a result of cost-cutting and retraction of head count.”
Tenants gave up a total of 949,000 square feet of floor area in the first six months of 2020, up from 646,000 square feet in the six months prior. The rate of surrender jumped 55% in the second quarter from the first, to 577,000 square feet.
The recent introduction of the national security law has also triggered worries that the legislation will harm Hong Kong’s status as an international financial hub. The government announced on Monday that it could freeze and seize property assets under the new law if the owner is suspected of being linked to an offense endangering national security.
Office availability, which indicates the amount of vacant space and areas that will be available in the next 12 months – climbed to 10.7% at the end of June, the highest in 15 years, the firm said.
The surrendering trend is set to continue across the board, said John Siu, managing director in Hong Kong.
“A lot of companies cut jobs as the economy worsens, so firms will be cautious when it comes to office demand,” said Siu. “Companies’ expansion plans will be postponed or even canceled, while the chance of downsizing becomes high.”
In contrast, some financial companies and tech giants from mainland China have recently signed up for more floors in the city. CMB International Capital Corp., China Minsheng Banking Corp. and Orient Finance Holdings Ltd. expanded their office space in the Central hub in the past three months, while ByteDance Ltd. and Alibaba Group Holding Ltd. leased additional area to accommodate their growing business needs.
The property firm expects office rents to fall by 20% in 2020 in Central as a result of diminishing demand. The district has the world’s most expensive office rents, averaging $313 per square foot, topping New York’s Midtown and London’s West End, data from Jones Lang Lasalle show.
Demand for office space is also set to suffer in the post-pandemic world, with more interest in home office arrangements and lease flexibility, the agency said. Shawna Kwan, Bloomberg