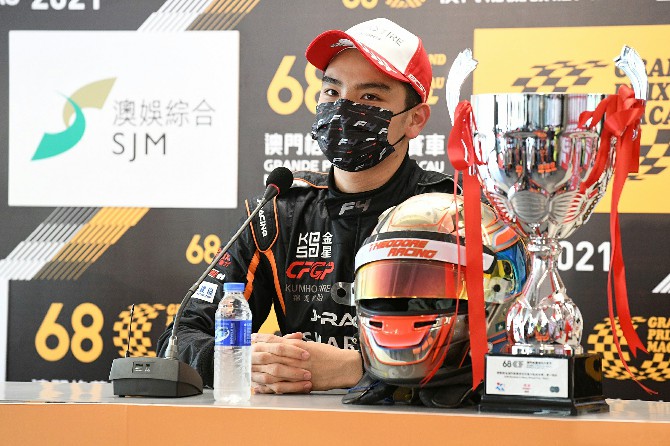 Local driver Charles Leong has fulfilled all the predictions that pointed him as the favorite to win the Macau Grand Prix Formula 4 (F4) race.
For the second time in a row, Leong showed supremacy over the weekend taking Pole Position on Friday, followed by two wins in two races on Saturday and Sunday.
Also as expected, the only driver capable of challenging Leong at some point was another local driver, Andy Chang, who repeated the second place overall from last year; and was able to make the fastest lap around the Guia circuit with the time of 2:29.331.
Also repeating last year’s story, mainland racer Li Si Cheng won third, completing the podium.
In a race without much of a story and with Leong controlling the pace since the second lap after a first lap scare in which Chang attempted a pass at Lisboa Bend, the unpredictability came only when Chang, running in second and with a comfortable gap for the third, was forced into a drive-through the pitlane as a penalty handed by the race stewards that no one, including Chang, could explain.
Still, Chang managed to push back after that unexpected event and retook his second position not long after, a time in which he was put to the test and eventually recorded the fastest lap around the Guia circuit in an F4 car.
At the press conference after the race, Leong said that this victory and his dominance proves that he has the skills and the talent to go further and higher in a racing career that was abruptly stopped when Leong was racing in the F3 championship due to difficulties in granting enough sponsors to continue racing.
“Without much track time since last year [Macau GP] it really pushed me to show again that I have the ability to go a lot higher [in this sport]. I am here to prove that ability and talent that I have and I think that just pumped me up [to this weekend],” Leong said noting that his weekend was just perfect and without any mechanical failure or any problem that could make his task more complicated.