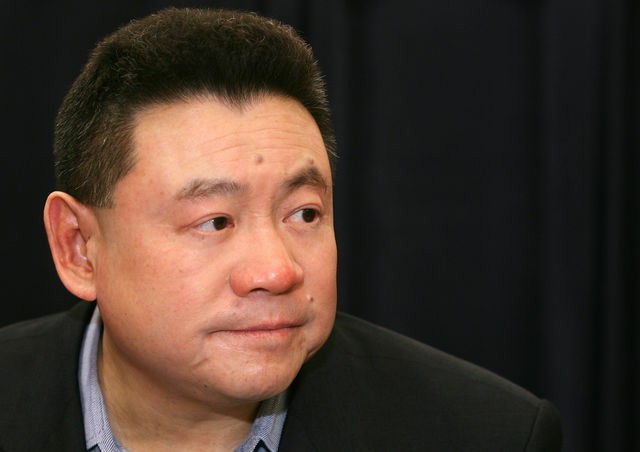 A painting of a swimming pool by David Hockney, owned by fugitive Hong Kong billionaire Joseph Lau, fetched 23.1 million pounds ($30 million) at Sotheby’s in London on Tuesday.
Painted in 1966, “The Splash” was estimated at 20 million pounds to 30 million pounds and offered anonymously. Lau bought the work at Sotheby’s in 2006 for 2.9 million pounds, a person familiar with the transaction has said.
The canvas was a highlight of the first post-Brexit auction season in the U.K. capital. It drew a single bid from Jackie Wachter, Sotheby’s director of contemporary private sales in Los Angeles, bidding on behalf of a client who had provided a third-party guarantee to the auction house.
Lau, 68, is the controlling shareholder of Chinese Estates Holdings, a Hong Kong property developer that builds offices, shopping malls and housing projects. He has an $8 billion fortune, according to the Bloomberg Billionaires Index.
In 2014, Lau was convicted of bribery and money-laundering in Macau in a case connected to the city’s former Secretary for Transport and Public Works, Ao Man Long. Lau has avoided a five-year jail term by not traveling to the Macau Special Administrative Region.
Last year, Lau filed – and later retracted – a lawsuit challenging the government’s proposal for extraditions to China, Macau and Taiwan. The proposal ignited months of protests and crippled Hong Kong’s econom.
Lau is known for his investments in art, wine and jewelry. He spent $17.4 million on Andy Warhol’s “Mao” in 2006 and $39.2 million on Paul Gauguin’s “Te Poipoi” in 2007. He bought five diamonds for $128 million from 2009 through 2015. DB/Bloomberg