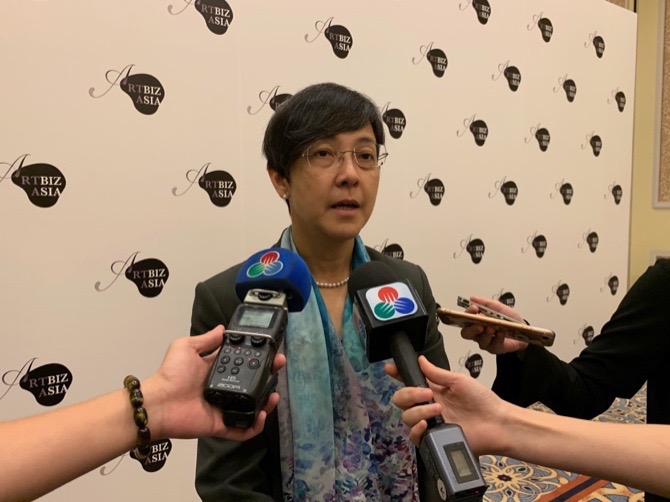 Although no budget was announced for the mega-event, which counts the participation of many of the city’s largest organizations, the tourism chief said she understands “the activities will not cost much.”

“We are reaching the final stage of preparations,” she said.

Speaking on how art drives tourism growth, Fernandes said the city’s heritage and culture remains part of why tourists come back to Macau, aside from gaming.

Fernandes cited the region’s annual art and cultural activities, such as the Fringe Festival, Hush Festival and the International Film Festival & Awards Macao, which she believes attracts tourists.

The tourism chief explained that there has been a recognition, particularly in China, of culture and tourism being interrelated, adding that the future growth of tourism will be rooted in culture in various forms.

“We have a lot of festivals that are being created and have also taken [their] roots in the culture of Macau, encompassing a lot of artists,” the official added.

Fernandes described the project as an “ambitious” one, as it would be held until October and integrate several entities, including gaming operators. A few gaming concessionaires have already kicked off their exhibitions under the Art Macao program.

MGTO aims to create a new brand of cultural tourism to enhance the artistic and cultural experience of the city through the five-month art festival.

“What we’re trying to create is a new band of cultural tourism using different art forms [for tourists] to come to Macau and appreciate Macau in a different way,” Fernandes said.

The official said that the government and private sector are paying more attention to what could possibly be the “heart of [Macau’s] entire tourism scene.” aiming to create a series of platform for local artists to express themselves as well.

The international and cultural event is set to feature visual art works and art installations that will be displayed in outdoor public spaces.

Six outdoor art installations from Macau, Korea, Belgium, Hong Kong and Beijing will be placed in different parts of the city.

A series of musical and theatrical performances will also be presented from next month.

“There should be more choices for people. […] We have to realize and admit that Macau is a small destination,” she said.

Meanwhile, Fernandes pledged that the bureau would also work on adding “a little life to the evenings of Coloane Village,” after a participant of the talk questioned whether it would also be possible to include this location in the bureau’s planning.