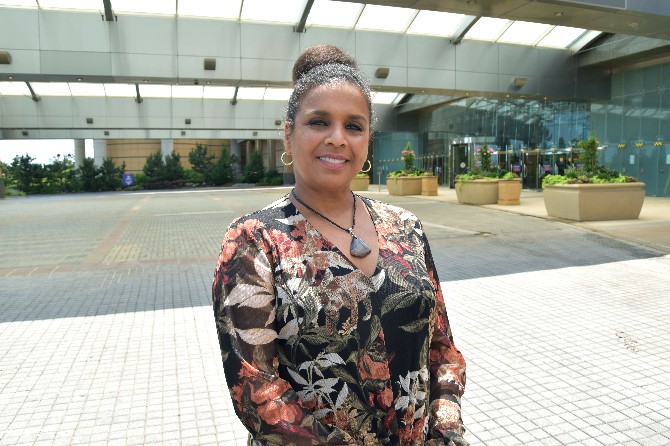 Melonie Johnson, the new president of the Borgata casino

Melonie Johnson is making history as the first Black woman to hold the title of president of an Atlantic City casino, and she’s one of only a small handful of women with such a job nationwide.
But right now, she’s dealing with a different sort of history-making challenge: Restarting Atlantic City’s top-performing casino in the midst of a coronavirus pandemic that has upended the gambling industry, and much of life itself.
“The biggest challenge is opening under this environment,” she said in an interview in the virtually empty casino this week.
Johnson spoke just 30 minutes before New Jersey Gov. Phil Murphy did an about-face and canceled indoor dining, while banning smoking and the consumption of all beverages — alcohol included — on casino floors.
That prompted Borgata’s parent company, MGM Resorts International, to drop its plan to reopen this week, the only one of Atlantic City’s nine casinos to do so. MGM said it could not offer guests the kind of experience they have become accustomed to under the current restrictions and has not announced a target date to reopen.
The Borgata had planned to do an invitation-only “soft opening” for its first few days, which would have started Thursday. On Monday July 6, doors were to be thrown open to the general public. Now, it’s anyone’s guess when the casino might reopen.
Johnson arrived at Borgata a month ago during the virus shutdown from MGM’s National Harbor casino outside Washington, DC, as part of a nationwide management restructuring.
She takes over the dominant casino in Atlantic City. Borgata won nearly $800 million from gamblers last year, more than twice what its nearest competitors did. That was an increase of 3.5% over its performance in 2018.
Johnson is one of a small number of Black women to run a U.S. casino, with or without the title of president.
Others include Mary Cheeks, president and general manager of the Jamul Casino near San Diego, and Jacqueline Grace-Pope, vice president and assistant general manager of the Horseshoe Baltimore Casino. Both had previously worked in management roles in Atlantic City casinos.
“Women in gaming have made tremendous progress since the first women broke the glass ceiling in Nevada decades ago, and that progress continues with the appointment of Melonie Johnson,” said Virginia McDowell, the retired president and CEO of Isle of Capri Casinos who is now active with Global Gaming Women, an organization supporting the advancement of women in the casino industry.
“As a professional who worked in the Atlantic City gaming industry for nearly twenty years, and a board member of Global Gaming Women, I am thrilled to see a woman of color elevated to run a premier property in Atlantic City,” she said.
Johnson realizes she is a trailblazer in her industry as a Black woman, but does not feel any added responsibility or pressure because of it.
“If you had asked 40-year-old Melonie, she would have said yes,” Johnson said. “But 50-plus Melonie says no. My personality does not allow me to seek validation through others; I have to wake up in the morning and like what I see in the mirror. I’m never afraid to say, ‘I don’t know’ or ‘I need help.’” MDT/AP