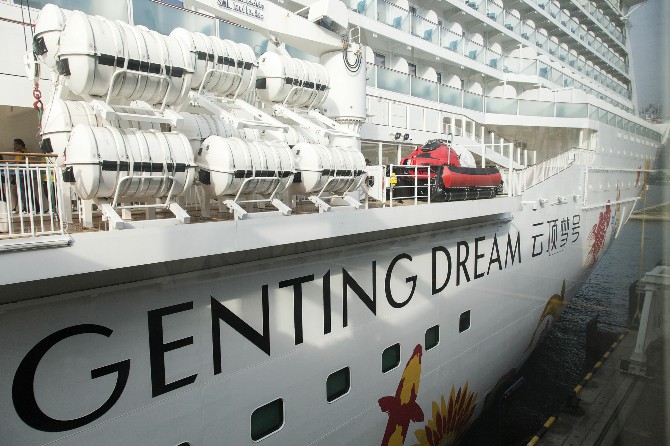 More signs of strain are showing at the Genting group after its Hong Kong-listed cruise ship operator reported a record loss and warned about its ability to continue as a going concern, while uncertainty surrounded the conglomerate’s casino operations.
The woes of Malaysian tycoon Lim Kok Thay’s empire encapsulate the impact 16 months of Covid-19 has had on the travel and leisure industries globally, with a slew of airlines, cruise operators and hotels reduced to operating at a fraction of pre-pandemic capacity, if at all. Many have collapsed.
Material uncertainties “may cast significant doubt about the Group’s ability to continue as a going concern,” Genting Hong Kong Ltd. said in a stock exchange statement Sunday, as it reported a net loss of $1.7 billion and net operating cash outflow of $629 million for the year ended December. Genting Malaysia Bhd. then issued a statement yesterday on limiting operating hours at its casino, only to recall it and say it would issue a new one later.
Genting Hong Kong, which halted all payments to creditors last year, dropped as much as 4.4% to a three-month low in Hong Kong. Genting Malaysia fell as much as 2.6% before rebounding to trade 1.1% higher in Kuala Lumpur. Genting Bhd. slid as much as 2.3%.
While travel within some countries is recovering as vaccination rollouts gather pace, a return to pre-pandemic levels could take years as the virus mutates and governments take different approaches to opening borders. Genting Hong Kong said in the exchange filing that the group “is cautiously optimistic that the cruise industry will return to normalcy towards 2023.”
Cruise giant Carnival Corp., which lost more than $10 billion last year, now plans to return three of its brands to service in the U.S. in July, with Alaska sailings departing from Seattle. Others in the travel industry, including dozens of airlines such as Thai Airways International Pcl and Latam Airlines Group SA, have been pushed into restructuring or bankruptcy by the pandemic.
Current liabilities at Genting Hong Kong exceeded assets by $3.3 billion and borrowings with principal of $3.4 billion were in default as of the end of 2020.
The cruise business will add further pressure to the Genting group as a whole, said Angela Hanlee, an analyst at Bloomberg Intelligence. While casino gaming revenue in Macau and the wider Asian region should recover to 50%-60% of pre-pandemic levels this year, there isn’t likely to be a rebound for cruises soon, she said.
Cracks were starting to show even before Genting Hong Kong said in August it was halting debt payments and asked creditors to form a steering committee to evaluate a planned restructuring proposal. The Genting group had to shut casinos and resorts around the world as countries imposed lockdowns to curb the spread of the virus.
Genting Hong Kong said earlier this month that its creditors and partners have given their formal written agreement for term sheets that outline arrangements for the company’s debt and recapitalization plan. It remains “optimistic a holistic consensual solvent restructuring proposal can be implemented by the first half of 2021,” it said in the statement Sunday.
Covid has forced the company to temporarily suspend almost all of its cruise operations and stop or defer ship construction, according to the statement.
“Further resumption of the cruise operations is dependent on the development of the Covid-19 pandemic, including the travel restriction requirement of different countries,” it said. Cathy Chan & Kyunghee Park, MDT/Bloomberg