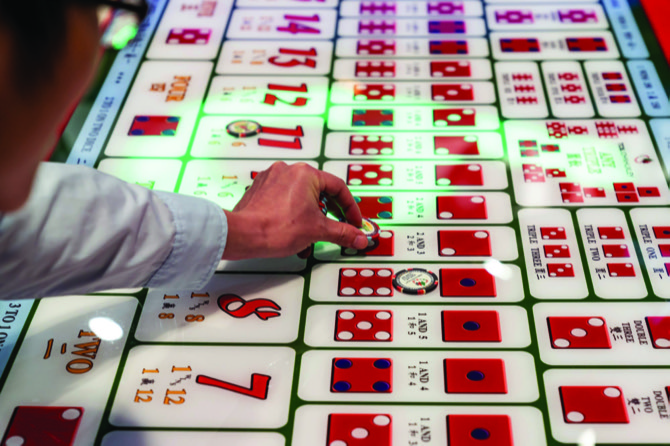 Gross gaming revenue in Macau rose 2.6 percent in October to 27.3 billion patacas (USD3.4 billion) from a year earlier, according to data released yesterday by the Gaming Inspection and Coordination Bureau. This missed the median analyst’s estimate for 3.5 percent growth.

October’s result is the clearest signal that China’s slowing economy and the trade war between Beijing and Washington is weighing on the outlook for the world’s biggest gaming center. Revenue growth in September slowed to 2.8 percent, the weakest showing in two years, much of that due to a typhoon that shut casinos for more than a day.

The growth, in line with that recorded in September, brings the year-to-date increase in gaming revenue down to 14.3 percent from 15.9 percent a month earlier. At the same time, last month’s revenues were almost one-quarter above the disappointing result in September, the worst month of 2018 to date.

October’s take was roughly in line with that of August and the preceding months, again suggesting that monthly revenues are plateauing. The recovery still has a way to go in order to reach the pre-recession high of MOP38 billion seen in February 2014. Current monthly revenues stand at about 71 percent of that level.

The result may not bode well for Macau since October is considered a peak month, traditionally showing higher gaming revenue because of the Golden Week holiday. The month had a robust start, as Chinese tourist arrivals to Macau for Golden Week jumped 14 percent from a year earlier. Last year’s October performance made for a tough comparison, said Union Gaming Securities Asia Ltd. analyst Grant Govertsen in a note. VIPs are making up a smaller percentage of gamblers, and therefore traditional holiday months like October will show less dramatic results, he said.

The Bloomberg Intelligence index of Macau casino stocks initially pared an earlier advance after the data was released yesterday, then rallied with the overall Hong Kong market, closing with a 2.6 percent gain. Wynn Macau Ltd. jumped 4.6 percent and MGM China Holdings Ltd. rose by 3.8 percent. The casino gauge has slumped in recent months after a two-year rally. It is down more than 40 percent from a May peak, touching a 20-month low on Tuesday.

Even though October represented the 27th straight month of revenue growth in Macau, the casino hub has seen softening growth since the second quarter. While mass market revenue has maintained solid revenue growth, VIP business has been hit by weakening China property prices and stock market turmoil. MDT/Bloomberg