Gaming | May Day GGR expected to be at 40-50% of pre-pandemic levels: JP Morgan 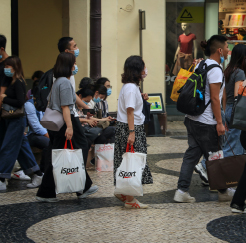 The gross gaming revenue (GGR) during the five-day May Day holiday from May 1 to 5 is expected to reach 40% to 50% of 2019 levels, also considered as pre-pandemic levels, according to the latest prognosis released on May 6 by JP Morgan.
The GGR daily run-rate is projected by the brokerage to stand at around MOP400 million to MOP500 million during the holiday, when compared to over MOP 1 billion during the same period in 2019.
The figure also represents a sharp advancement of 50% to 80% from the GGR run-rates in the previous months, MOP270 million to MOP 280 million per day in March or April. This performance is “well above the 30% to 50% uptick that we typically see for May Golden Week reflecting pent-up demand,” JP Morgan said.
According to the statistics compiled by the Macao Government Tourism Office (MGTO), Macau registered a total of 167,000 tourists during the five-day May Day holiday, or the average daily tourist tally of up to 33,000.
The fresh arrival data provides compelling evidence to earlier remarks made by Lam Tong Hou, representative of the MGTO during the media brief last Tuesday, saying that she is anticipating the aggregate tourist arrivals to Macau during the five-day May Day holiday to exceed that of the previous Golden Weeks.
According to the data compiled by the MGTO, the seven-day Spring Festival Golden Week from February 11 to 17 this year saw a total of 90,615 tourists or 12,945 daily visitors on average.
During the October Golden Week from October 1 to 8, 2020, there were 156,000 holidaymakers, equivalent to 19,500 daily holidaymakers.
Despite the noticeable improvement from the previous two Golden Weeks, JP Morgan stated the visitation during this May Golden Week is expected to only reach around 25% of that of the 2019 May Golden Week.
According to MGTO, the actual average daily visitor during this May Day holiday reached 21.1% of the 2019 May Day holiday levels, around four percentaage points lower than the brokerage’s estimate.
The official GGR for the holiday is believed to be unveiled today, suggests the brokerage.