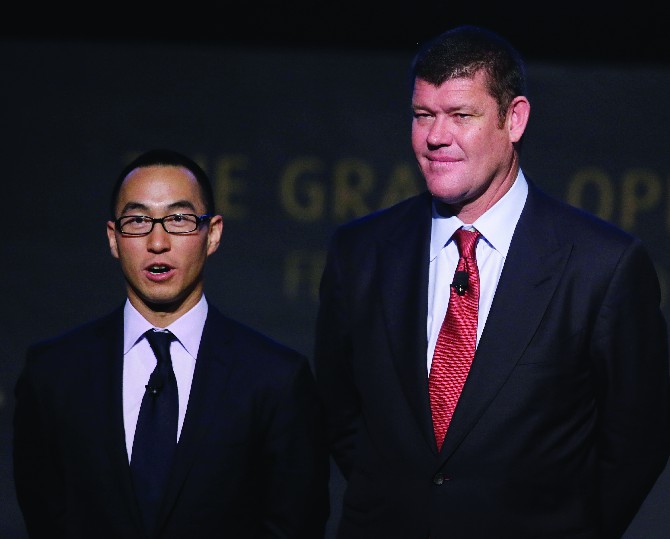 Melco Resorts & Entertainment Ltd. scrapped an agreement to buy another AUD880 million ($593 million) stake in Crown Resorts Ltd., a blow to billionaire James Packer’s plans to retreat from his Australian casino business.
In a statement, casino-resort operator Melco said it won’t buy a second tranche of shares in Crown that equated to an additional 10% of the Melbourne-based company. While Melco cited the impact of the coronavirus on Asian tourism and the temporary closure of casinos in Macau – including its own – the completion of the Crown deal had been in doubt for months.
Melco in May last year said it would buy 20% of Crown from Packer, the company’s dominant shareholder, and even increase that holding as part of a global expansion beyond the gambling center of Macau. That vision began to unravel in August when the deal was sucked into an Australian regulatory probe into Crown. Days later, Melco announced it would delay the second half of the purchase and said it might scrap it completely if the inquiry made unreasonable demands.
“It is Melco’s belief that, at this time, its capital needs to be deployed on its core assets,” the company said in its statement. Now left with about 10% of Crown, Melco said it won’t seek a seat on the board.
In separate statements, Packer’s private investment company Consolidated Press Holdings Pty and Crown confirmed the cancellation of the agreement but didn’t comment further.
The death of the Melco deal – in its original form, at least – leaves Packer once again without his chosen suitor. Crown, the vehicle for most of his personal wealth, considered selling to U.S. rival Wynn Resorts Ltd. early last year before the discussions leaked to the media and talks broke down.
The gaming regulator in Sydney is conducting a public inquiry into Melco’s planned acquisition. It’s also assessing Crown’s suitability to run a new casino in the city following media reports last year that Crown used junket operators linked to drug traffickers to attract wealthy Chinese gamblers.
A spokeswoman for the inquiry declined to comment on Melco’s announcement or say whether it would alter the investigation, which is due to hold public hearings on Feb. 24. Crown has said the media reports in question were part of a “deceitful campaign” that sought to damage its reputation.
Melco said it’s now reassessing all non-core investments in the pipeline for 2020. On Tuesday, Macau’s government asked casinos to suspend operations for half a month in an effort to slow the spread of the coronavirus. Countries around the world are restricting travel to and from mainland China. Macau is the only part of China where casinos are legal.
“Melco’s decision not to purchase more shares in Crown Resorts may spur questions about the casino operator’s long-term focus,” said Margaret Huang, gaming and lodging analyst at Bloomberg Intelligence. Angus Whitley & Charles Capel, BLOOMBERG