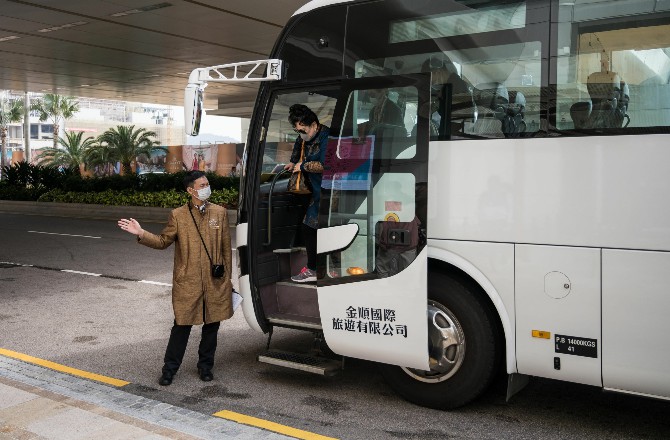 Travel restrictions imposed by the mainland dealt a strong blow to gross gaming revenue in January, in what has become the latest setback for Macau after a dismal 2019 rocked by Hong Kong protests, the China-U.S. trade war and a crackdown on online gambling.
January revenue amounted to 22.12 billion patacas, according to data released by the Gaming Inspection and Coordination Bureau over the weekend, down 11.3% in the worst start to the year since 2017. Bloomberg reported the decline being worse than the median analyst estimate of a 9.7% fall.
Behind the sharp contraction is the plummeting number of visitor arrivals from the mainland, Macau’s primary tourist source market, where a deadly coronavirus outbreak (2019-nCoV) has infected more than 14,000 and killed over 300 as of Sunday.
Visitor arrivals during the traditionally busy period of the Lunar New Year plummeted 78% year-on-year between January 24 and 30. The number of mainland visitors dropped even faster at 83%, after China halted visitor visas to the gambling enclave and banned group tours. Macau has also initiated border restrictions.
The Lunar New Year holiday typically gives about a 10% boost to average Macau casino revenue, according to Bloomberg Intelligence’s analyst Margaret Huang.
Prior to the outbreak, market observers had pegged January as a possible rebound month on the basis of pent-up demand from poor visitation in the last quarter of 2019. Specifically, the December visit of Chinese President Xi Jinping was believed responsible for a 13.6% drop in visitor arrivals that month and a nearly proportionate 13.7% year-on-year fall in gross gaming revenue.
With travel restrictions and other precautionary measures likely to remain in effect this month, analysts expect February to see further contraction as the coronavirus infection continues to spread globally. The high contagion rates imply the impact may last longer than SARS did in 2003, according to UOB Hay Kian’s Robin Yuen, and will affect both VIP and casual gamblers.
The Bloomberg Intelligence index of Macau operators fell 10% in January, slipping sharply in the last 10 days as the infection spread rapidly across countries.
Chief Executive Ho Iat Seng said last month he would not rule out the possibility of closing the city’s casinos if the circumstances demand it. No such order had been given as of Sunday, but casino staff have been required to don face masks as a preventive measure.
Late last week, a report by credit rating agency Fitch Ratings suggested that the 2019-nCoV outbreak would have a negative impact on the cash flow of Macau casino operators. The report noted that while the casino operators will be able to rely on their strong credit backgrounds to escape the worst of the cash flow crisis in the short- term, there is a long-term risk to credit profiles if the epidemic lasts for more than two quarters.
The casino sector directly accounts for about half of the local economy, but is also a lifeline for many small and medium-sized businesses in the city.