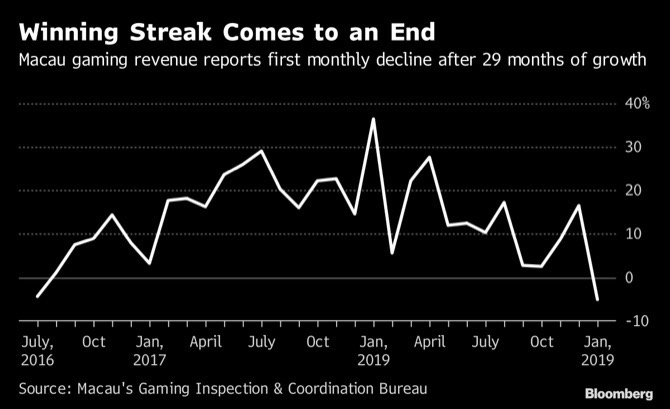 Monthly casino revenue in Macau fell for the first time in more than two years as China’s economic slowdown deterred high rollers – but the drop was less steep than expected, fueling a relief rally in gaming shares.

Gross gaming revenue in Macau fell 5 percent in January to MOP24.9 billion (USD3.1 billion) from a year earlier, according to data released on Friday by the Gaming Inspection & Coordination Bureau. With the median analyst estimate calling for a 9 percent drop, the Bloomberg Intelligence index of Macau gaming stocks climbed after the news, with shares of Wynn Macau Ltd. and Galaxy Entertainment Group Ltd. rising 2 percent at the close in Hong Kong.

The results may bolster optimism that recreational gamblers who plunk down smaller bets than high rollers are still trekking to the world’s largest gaming mecca even as China’s economic slowdown and trade tensions weigh on Chinese consumers. Overall, casino revenue in Macau is expected to decline overall this year as nervous Chinese gamblers stay away from the tables.

“The revenue drop in January reflects the continuous weakness of the business from high-stake gamblers who are holding on to their money more tightly amid China’s economic uncertainties such as the trade war,” said Bloomberg Intelligence analyst Margaret Huang.

January’s revenue decline, which was anticipated, snapped 29 straight months of growth. The timing of this year’s Lunar New Year didn’t help Macau’s monthly casino takings. The holiday typically comes with a few weeks of a marked slowdown prior to it. Those weeks of lag showed up in the January numbers, setting up a difficult comparison against a January 2018 revenue gain that was the strongest in four years.

“We are encouraged by the January results and view the market as being more robust than it gets credit for, especially given the timing of Chinese New Year this year,” Govertsen wrote.

The Bloomberg Intelligence index of Macau casino shares closed with a 0.7 percent gain in Hong Kong Friday, having reversed a decline at the opening.

Now all bets are on February. This month’s receipts, which will reflect the lunar holiday, are expected to grow 5 percent, according to a survey of analysts compiled by Bloomberg. Govertsen said mass market demand remains high and sees the ”beginnings of a robust holiday period.”

Lawrence Ho, chief executive officer of casino operator Melco Resorts & Entertainment Ltd., said recently that the concerns about Macau are overblown. With all of the casino operator’s hotel rooms at its three properties all sold out, Ho said he expects a booming Lunar New Year holiday.

The market was also buoyed by Wynn Resorts Ltd.’s estimate beat last week, after it reported that fourth-quarter revenue and earnings were stronger than expected and attributed it to improved business in December.

Still, Wynn’s top chief took a cautious tone. “Chinese New Year is coming up and that is going to be the real test for the first quarter,” said Chief Executive Officer Matthew Maddox on a conference call. “In Macau, it’s inherently volatile and there are peaks and valleys.” MDT/Bloomberg