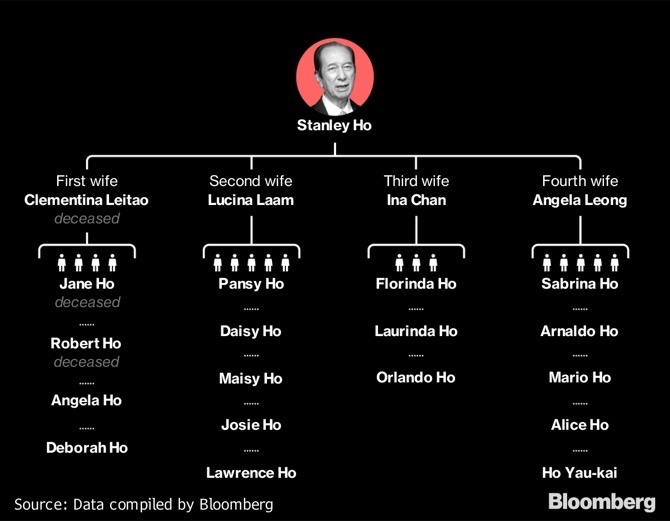 According to Chan and Ho’s daughter Laurinda Ho, the 97-year old gaming magnate is in good shape and is only resting at Hong Kong Sanatorium & Hospital in Happy Valley, Hong Kong.

Speaking to the Hong Kong press, Chan said, “He is in good shape. I don’t know why there were such rumors,” as cited in a report issued by South China Morning Post, adding that Ho could eat and talk to family members.

Chan added that Ho’s Lunar New Year wish was that his children would remain obedient.

“Touch wood! There are such rumors in the new year,” said Laurinda Ho, who also met the press with her mother outside the hospital on Saturday.

Chan was one of the many family members who visited Ho at the private hospital amid reports that the tycoon was suffering multi-organ failure.

However, when asked about Ho’s condition, she denied that she was there to visit him and said that she had only gone to the hospital “to handout lai sees.”

The health of the founder of gaming group Sociedade de Turismo e Diversoes de Macau (STDM) has become increasingly fragile in recent years, prompting disputes between his heirs for control of his many assets.

In 2009, Ho fell in his apartment at Repulse Bay in Hong Kong, injuring his head and subsequently underwent brain surgery. He was discharged from hospital six months later, but had to return to hospital care in 2014.

In April 2018, Ho became the latest Hong Kong billionaire – after Li Ka-shing – to step away from the empire he built, passing on the top roles at casino operator SJM Holdings Ltd. to his heirs, as revealed by a filing to the Hong Kong stock exchange.

The casino tycoon retired as chairman and executive director of SJM on June 12. He became chairman emeritus. Daisy Ho, his 53-year-old daughter, took on his roles. Angela Leong, 57,  is SJM’s second-largest shareholder and acts as co-chair with another executive director.

“While Ho hasn’t been involved in operations for many years, we can’t help but think that the proposed board structure is a bit messy,” said JPMorgan Chase & Co.’s analyst DS Kim in a note. “This complicated structure, in our view, leaves room for a potential power tussle within the board, given the lack of clear control,” he told Bloomberg.

Kim is looking for a clearer plan, such as a single chairperson, to fine-tune SJM’s corporate structure before the opening of the operator’s first property in Macau’s key Cotai district this year.

More recently, a new alliance has emerged among some of Stanley Ho’s 17 children in the decade-long family battle for his Macau casino empire. and eldest daughter Pansy Ho looks the likely victor.

As the Times reported in January, Pansy Ho announced that she had joined up with some of her siblings and the Henry Fok Foundation, and would hold a combined 53 percent in STDM, which controls casino operator SJM Holdings Ltd. The alliance gives her the upper hand over Angela Leong, her main rival in the battle for control of Macau’s original gaming company.