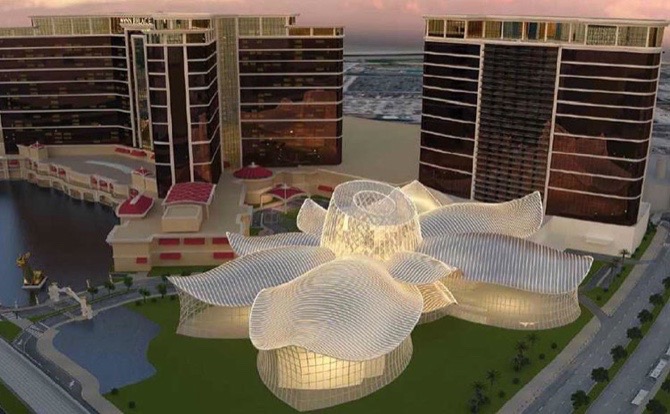 Wynn Resorts Ltd. unveiled plans for a USD2 billion (MOP16.1 billion) expansion of its properties in Macau, including a theater and museum in the world’s largest gambling market.

The Crystal Pavilion complex, which will be adjacent to the Wynn Palace on the Cotai peninsula, will include two hotel towers, interactive sculptures, gardens and a performance space in a glass and steel structure designed by architect Robert A.M. Stern. Construction will begin in 2021, with an opening set for 2024. The company expects to get as much as a 20% return on the investment.

Chief Executive Officer Matt Maddox is pressing ahead with his expansion plans, even with markets skittish over trade tensions with China.

Casino operators there are under pressure to invest in non-gambling attractions by a Chinese government looking to diversify its tourism industry.

Wynn Resorts is also competing for a license in Japan, which recently legalized casino gambling. The company unveiled an illustration of an urban waterfront resort in that country on Wednesday as part of presentation to investors at its new $2.6 billion Encore Boston Harbor resort.

Licenses for Macau casinos are expected to come up for renewal over the next few years, with Wynn’s due in 2022, giving the company an incentive to underscore its commitment. Wynn also plans $125 million in renovations for its original resort in that Asian gambling enclave.

Wynn projected revenue growth of 22% through 2021, and 28% higher earnings before interest, taxes, depreciation and amortization. The Boston resort could generate as much is $325 million in profit on revenue of $1.1 billion within three years, the company said.

The improved performance will come as Wynn gets back on track after the ouster of its founder and former CEO, Steve Wynn, and the subsequent $60-plus million in fines it had to pay. It also expects that its operations in its three primary locations – Las Vegas, Macau and Boston – will continue to increase, driving its revenue up.

Despite the ambitious outlook, some analysts were expecting higher forecasts, and Wynn Resorts fell as much as 4.4% to $127.86 in New York time.

“The long-term financial targets released at the 2019 investor day are slightly more conservative than expectations, although the capital allocation commentary should be received positively,” David Katz, an analyst with Jefferies Financial Group LLC, said in a note.

Macau casino revenue in June surprised analysts by growing 5.9% year-on-year to reach 23.8 billion patacas ($3 billion). The result rounded out the first half of the year at MOP149.5 billion, just 0.5% lower than gross gaming revenue during the first six months of 2018. MDT/Bloomberg