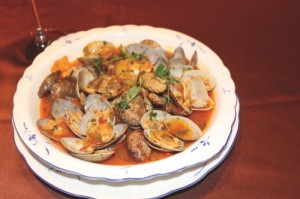 Copa Steakhouse and Golden Court, two of Sands Macao’s restaurants, have recently introduced new gourmet menus to grab food enthusiasts’ attention.
Copa Steakhouse remains faithful to a truly American gastronomical tradition, while Golden Court focuses on serving mainly Chinese customers looking for Sichuan-style dishes.
Behind the preparation of new Copa Steakhouse dishes is Venezuelan chef Luis Silva. In a food tasting session yesterday, he revealed that the new menu is now more faithful to the American tradition.
“We are trying to keep the essence of a steakhouse,” he assured, adding that they have added a “Wagyu Beef Burger with Cheddar Cheese and Smoked Bacon” to the menu for the first time.
Changes were also introduced to the menu’s Portuguese section, with the team adding “Pork Marinated in Wine and Garnished with Clams”, since it “is a good sell.”
“It’s a hearty dish and so we’ve decided to include it again,” he added.
Traditional American fruit crumble is another highlight of the new Copa Steakhouse menu. Although usually prepared with seasonal fruit, it’s time for the “Blueberry Crumble with Vanilla Whipped Cream”.
“Americans usually eat it when they’re dining together with friends or family. It’s food to share and enjoy together,” the chef said, adding that it is “a deep crumble” which can be prepared with different types of fruit, from blueberries to mango.
Copa Steakhouse was voted one of Hong Kong Tatler magazine’s Best Restaurants of 2014, and it received the award of excellence from Wine Spectator Magazine this year, as well as the Best Western F&B award during the 2014 Hurun Presidential Awards, Sands said in a press release.
The Cantonese-inspired Golden Court is located right next to Copa Steakhouse. The latest additions to the menu include Fired Angus Beef and Goose Liver, Sautéed Clams with Black Bean, or Shrimp Fried Rice with Sichuan Chili.
Golden Court’s Chef de Cuisine, Kan Kai Wing, said that they’ve added new dishes to the menu, as more guests want to taste spicy Chinese food. The Angus beef and goose liver is mixed with Sichuan chili, peanuts and garlic, to offer guests a taste of Sichuan-style gastronomy.
“The menu is targeting mainland China visitors, and we try to adapt it as much as we can to their taste,” he told reporters.
The restaurant has just been renovated and has a total of 18 live seafood tanks, from which customers can easily choose. The restaurant was also listed in this year’s edition of the Hong Kong Tatler Best Restaurants Guide.
Prices of dishes mentioned range from MOP58 (blueberry crumble) to MOP338 (for the Fired Angus Beef and Goose Liver). CP