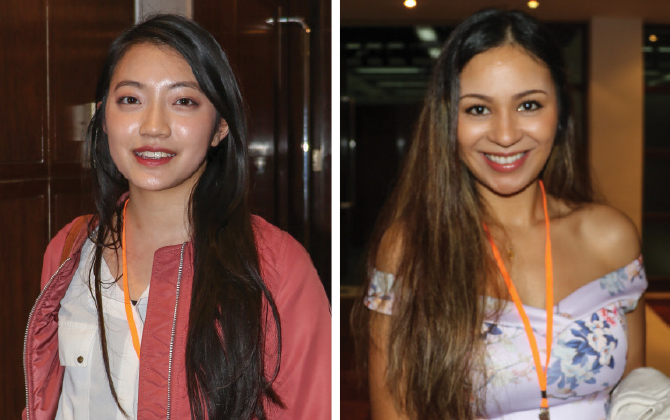 The Macanese Youth Association (AJM in the Portuguese acronym) urges Macanese youth living abroad to take a more active role in leading local Associations (Casas de Macau) in their own cities and countries.

That was the main message of Association president Duarte Alves during his speech, which took place before the screening of “Macanese Vibe” at an event yesterday evening at the Stanley Ho Auditorium of the Consulate of Portugal in Macau.

Alves encouraged his audience, which comprised mostly youngsters in the region, to participate in ‘Encontro’ (Gathering of the Macanese Communities) of which this session was a part.

Alves also remarked that the Macanese people must assume a more relevant position and role in the future of the MSAR, saying, “The MSAR needs the Macanese identity and our culture to differentiate herself from the remaining [parts] of the P.R. China.”

“Our key strengths are that we know how to speak Portuguese, we know how to speak Chinese – not only Cantonese but also Mandarin – as well as a grounded firsthand knowledge of the Portuguese and the Western cultures, and also the Chinese culture… We are, in fact, the platform, and I believe that our community can have a very important role in the development of Macau as a platform and a link between China and the Portuguese-speaking countries.”

The president of the Standing Committee of the Council of the Macanese Communities (CCM), José Luís Sales Marques revealed in his own speech that the session, usually dedicated to Macau’s youth, would be an important component that will become a permanent part of the program.

The event presented several video testimonies from young Macanese living around the world about their thoughts on being Macanese. The Times spoke with some participants on the sidelines of the event.

One young woman, Lara, moved from the Philippines to Dubai, where she now works as a flight attendant. Related to the Macanese people through her stepfather, who settled in Vancouver, Canada, Lara said that she is a true fan of ‘Encontro’.

“Every time I come to ‘Encontro’ I absolutely love it. Seems like the same people keep coming because we feel so much connection here and then there are new people as well and it is nice to meet them,” Lara said.

“This is my second or third time here and I love it, and I will keep coming. No matter how busy I am, I will always make my way here. It’s a pleasure to be here.”

Arriving from Toronto, Canada was April, who said, “It is a great idea to bring together all Macau club members in a way to reconnect these people with Macanese culture and Macanese heritage.”

A first-timer at the event, April explains that only “one or two years ago” she started to discover her Macanese heritage, saying “it is actually very good for me to be here in Macau to experience everything and to see everything firsthand, since I didn’t have much of a background before.”

In her opinion the region is “filled with a lot of culture and history, which is what I really like to see,” she said.

“I was surprised by how everything looks small. I never thought that Macau was that small. If you want to go anywhere I can actually just walk there and [it] won’t take too long.”