Germany | Berlin marks 25 years since fall of the Wall 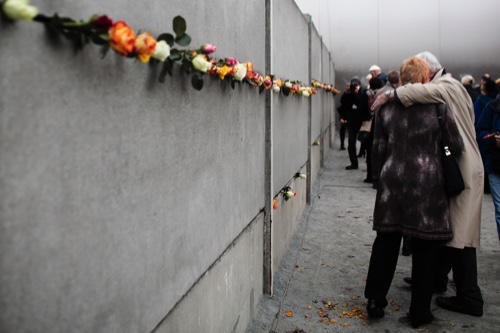 German Chancellor Angela Merkel led celebrations yesterday marking the 25th anniversary of the fall of the Berlin Wall, calling it an example of the human yearning for freedom and honoring those who helped bring down the barrier that for 28 years symbolized the Cold War.
On the night of Nov. 9, 1989, thousands of East Berliners streamed through the once-closed border crossings after communist authorities caved in to mounting pressure and relaxed travel restrictions that had prevented their citizens from going to the west for decades.
“The fall of the Wall has shown us that dreams can come true,” Merkel said at the main memorial site for the Wall on Bernauer Strasse. “Nothing has to stay the way it is, however big the hurdles are.”
The fall of the Wall was the climax of weeks of popular protests, spurred by changes that had already taken place elsewhere in Eastern Europe. Its collapse brought down the regime and led to the reunification of East and West Germany 11 months later.
The most prominent beneficiary was Merkel, a physicist whom then-Chancellor Helmut Kohl plucked from East Germany and gave a post in his first post-unity cabinet.
“The feeling was indescribable,” Merkel, 60, said in a Nov. 1 podcast, describing her experience crossing over to West Berlin on the night the border opened. “These were times that truly changed the world. You don’t forget those emotions.”
Merkel noted the important examples set by the democracy movements in Poland, Czechoslovakia and Hungary, and praised those East Germans who were inspired by them to stand up to the dictatorship.
She also honored the many who suffered under the communist regime, including the 138 people who died at the Wall. 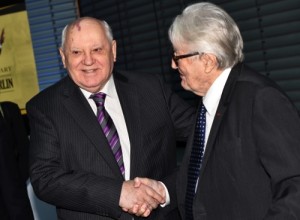 Tensions between the major powers have pushed the world closer to a new Cold War, former Soviet leader Mikhail S. Gorbachev said Saturday.
The 83-year-old accused the West, particularly the United States, of giving in to “triumphalism” after the collapse of the Soviet Union and the dissolution of the communist bloc a quarter century ago. The result, he said, could partly be seen in the inability of global powers to prevent or resolve conflicts in Yugoslavia, the Middle East and most recently Ukraine.
“The world is on the brink of a new Cold War. Some are even saying that it’s already begun,” Gorbachev said at an event marking the 25th anniversary of the fall of the Berlin Wall, close to the city’s iconic Brandenburg Gate.
Gorbachev called for trust to be restored through dialogue with Moscow, and suggested the West should lift sanctions imposed against senior Russian officials over the country’s support for separatist rebels in eastern Ukraine. Failure to achieve security in Europe would make the continent irrelevant in world affairs, he said. Frank Jordans, Berlin , AP