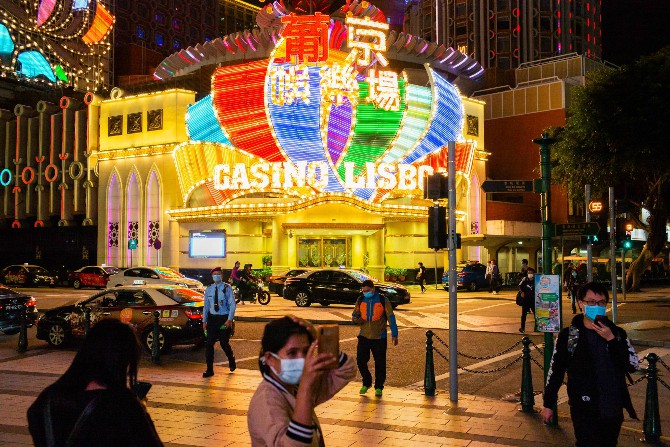 The Macau SAR’s gaming revenue dropped for the sixth consecutive month in March, down nearly 80% from a year earlier, according to data from the Gaming Inspection and Coordination Bureau.
Gross Gaming Revenue was 5.26 billion patacas (USD658.7 million) last month as casinos were slammed again by quarantines and border restrictions in China that kept gamblers away during the coronavirus pandemic.
The tumble in the city’s GGR was in line with the median analyst estimate of a 79.5% fall, after the 88% decline in February.
Following the 15-day closure of casinos in the city in February, only a total of 3,100 gaming tables immediately resumed operations, representing 46% of the total number of tables.
The shutdown also came after the world’s biggest gambling hub had already been battered by months of protests in Hong Kong and a two-year-long trade war.
By mid-March 80% of the gaming tables had reopened.
However, even since reopening the facilities, gaming floors have seen little rebound as China continues its halt on individual and group visas to Macau in a protracted fight against the virus, while the SAR has barred non-residents outside China from entering the city from March 18.
Meanwhile, the slow recovery has also been hobbled by a 14-day quarantine rule initiated by China’s Guangdong province last week, which brokerage JP Morgan Stanley said in a March 27 note was “effectively the same as the casino shut-down” for Macau.
With few flights in, almost every visitor to enter Macau does so through the land border with Guangdong.
The government had already halved its 2020 gross gaming revenue forecast to 130 billion patacas in March before the announcement of the new quarantine rule that has considerably worsened the short-term outlook for casinos.
Analysts at JP Morgan have further reduced its estimates for the city’s GGR this year to -35%.
In its February industry report, it had cut its 2020 GGR estimates by 18 percentage points and earnings before interest, taxation, depreciation and amortization by 32%.
“With Covid-19 spreading globally and travel restrictions tightening, we are cutting our estimates further. […] We cut our GGR estimates for the industry to -35 percent for 2020” said analysts Praveen Choudhary, Gareth Leung and Thomas Allen, as cited in a note seen by GGRAsia.
“In terms of quarterly impact, we expect GGR to decline by 60% year-on-year and 56% in the first quarter and second quarter [respectively], due to continued weakness in visitation amidst quarantine rules,” the team added. MDT/Bloomberg