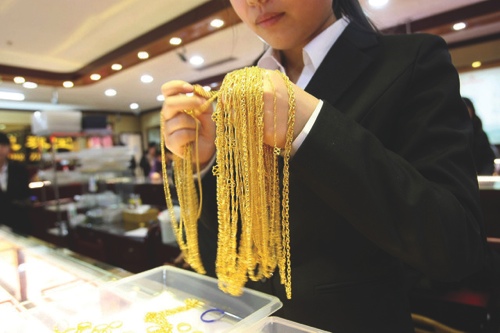 Gold demand in China shrank in the second quarter as consumers in the biggest user bought fewer bars, coins and jewelry amid a clampdown on corruption and as the buying spurred by last year’s price slump wasn’t sustained.
Purchases in Asia’s largest economy plunged 52 percent to 192.5 metric tons in the three months to June from a year earlier, contributing to a drop in global consumption, the London-based World Gold Council said in a report yesterday. Every Asian economy tracked by the producer-funded group bought less bullion in the period, apart from Taiwan, as demand across the biggest consuming region shrank 46 percent to 470.9 tons.
While gold’s tumble into a bear market in April last year spurred a purchasing frenzy that helped to push China’s demand above India’s, the pace of buying dropped this year. The data add to signs of slowing bullion consumption in Asia as banks including Goldman Sachs Group Inc. expect prices to resume losses. President Xi Jinping stepped up an anti-graft drive in China this year, hurting demand for luxury goods.
“The data confirms our view that Chinese gold demand will stay relatively weak compared with 2013, which only serves to drag gold prices lower into the second half,” said Barnabas Gan, an economist at Singapore-based Oversea-Chinese Banking Corp.
Gold for immediate delivery advanced 9.6 percent this year to USD1,316.84 an ounce at 4:43 p.m. yesterday in Shanghai. Prices increased 3.4 percent in the three months through June compared with the 23 percent drop a year earlier, which was the largest quarterly slide since at least 1920.
The campaign against bribery and corruption “has strongly discouraged purchases of bars and coins, along with other luxury-gift items,” the council said. “Price-sensitive investors were discouraged by the lack of price volatility.”
Jewelry consumption in China fell 45 percent to 143.4 tons in the quarter, while demand for bars and coins lost 64 percent to 49.1 tons, the council said. Last year, mainland consumption was a record 1,065.8 tons, or about 28 percent of global usage.
Demand in China may drop to 900 to 1,000 tons this year, Albert Cheng, the council’s managing director for the Far East, said at a media briefing in Shanghai yesterday. That would be as much as 16 percent lower than in 2013.
China was the market most affected by the comparison with the second quarter of 2013, which was the highest quarter ever for jewelry demand due to the intensity with which consumers responded to the price decline, the council said.
Consumption was expected to expand to at least 1,350 tons by 2017 amid rising wealth, the council said in April. The global flow of bullion from west to east that helped to make China the world’s largest user will probably last for up to two decades, the China Gold Association forecast in June.
Gold will drop to $1,050 an ounce by the end of 2014 as the U.S. recovery accelerates, according to Goldman Sachs. Prices are expected to retreat as the Federal Reserve ends stimulus while contemplating interest-rate rises, said Gan at OCBC. Bloomberg