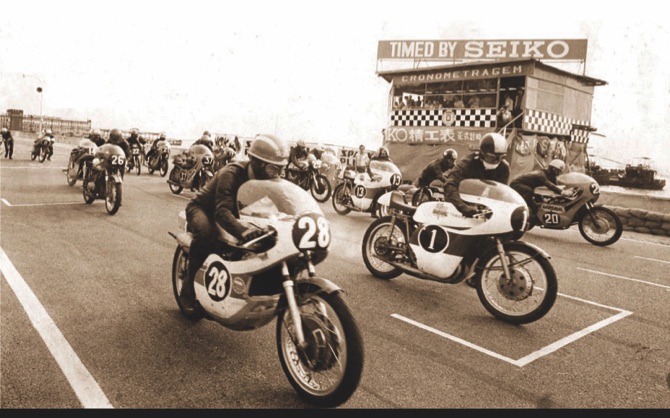 Half a century has passed since motorcycle racing occurred for the first time on Macau’s Guia Circuit. That is, fifty years of joy and disappointment, with glory and sadness.

Introduced in 1967, the Macau Motorcycle Grand Prix soon became one of the annual highlights that excited the streets of the region and not long after that introduction, it became a legendary race.

Every year, the race repeats bringing a different story of a group of brave men and their bikes that set to challenge the bends of the Guia Circuit for nothing but the laurels of glory.

By the 50th Anniversary, the Times will bring you a brief retrospective of the most relevant moments of the past 49 editions of the most adrenalizing races across the globe. 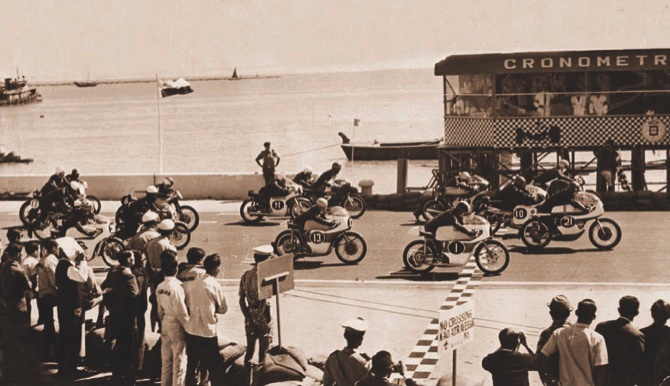 The Japanese riders dominated the first 10 years of the Grand Prix, with names like Hasegawa, Motohashi and Kawasaki among others, making the headlines during those times and becoming the first legends to win the competition.

From that group, Hiroshi Hasegawa is definitely a name that deserves to be highlighted, not only for being the first ever winner of the Macau Motorcycle Grand Prix in 1967, but for taking a second win the following year, becoming the event’s first double champion. 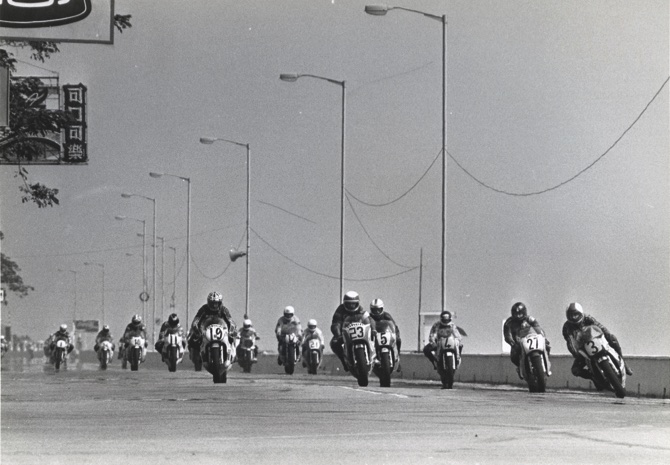 Another name to remember in this first decade is Hong Kong’s John MacDonald, the winner in 1969 and the only man so far able to win in Macau in both two-
wheel and four-wheel races (winning 1965’s Guia Race).

1973 was known as the “Big Boom” year for the motorcycle race that gathered over 100 entries, which led to the introduction of a second race called “Organizer’s Trophy Race” for non-qualifiers in the Motorcycle GP. 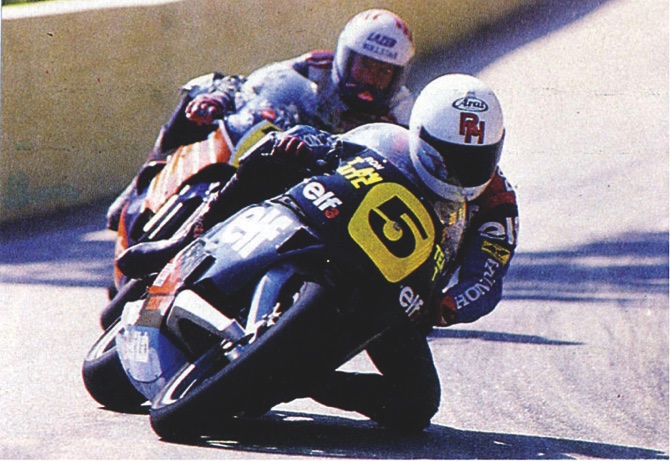 1977 was the confirming year of the rise of British stars in the Grand Prix after in 1976, and marking the close of the first decade of the Motorcycle GP, Chas Mortimer took the trophy from the hands of the Japanese.

This was repeated the next year with the great Mick Grant taking the victory laurels again to the UK and to Kawasaki.
Before the Brit could entirely dominate the Grand Prix, it was time for another Japanese, Sadeo Asami to take home the wins of three consecutive races (1978, 1979 and 1980) making history as the first ever treble winner of the race.

Such an achievement seems to have inspired another British rider, known as the “Rocket” – Ron Haslam, that won the next three events from 1981 to 1983 equaling Asami on the Hall of Fame of the GP just before returning in 1985 to step ahead of him with two consecutive victories in 1985 and 1986.

The 16th edition of the Motorcycle GP (1982) saw Charlie Williams clocking a lap in 2:35.76, a new record that was untouched for almost a decade. 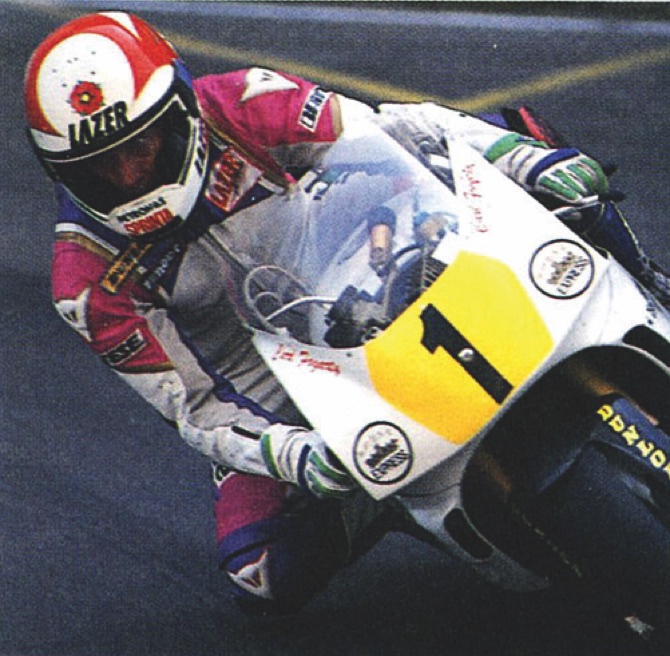 Getting Faster and Faster

If the first 20 years ended with the incredible supremacy of Ron Haslam, the next decade picked up exactly where the last had left, with Haslam breaking another record achieving his sixth checkered flag in the first-ever motorcycle race run under the influence of a typhoon (Nina).

The year after brought Macau one of the race’s most memorable riders, though by no means its most successful.

Making his first and only race debut in Macau, was American Kevin Schwantz on his mythical Pepsi Suzuki 500.

The American took an expectable win in a cheerful race where he had time inclusively to delight the crowd with long and high-speed wheelies.

1991 saw the event reaching the milestone of a quarter-century, commemorated with the Silver Jubilee edition.

Making his way finally to the top was  Belgian rider Didier de Radigues who won the race as well as finally breaking the lap record, setting a new one of 2:35.91.
The record was brought down in 1992 and again in 1993, firstly when Carl Fogarty took his Harris Yamaha 500 to take the win, clocking the best lap time of 2:33.94, and then the following year by Robert Dunlop, who also set a new lap record of 2.33:18.

The third decade of the Grand Prix saw the rise of Scotsman Steve Hislop who took three wins between 1990 and 1994.

The Rise of Michael ‘Blade’ Rutter

In the 32nd Motorcycle Grand Prix, Michael Rutter finally took his first victory. On the way, he also smashed the existing lap record by over 2 seconds.

After spending a year out of the top spot, Rutter moved back to the top position in 2000, claiming his second victory in three years. 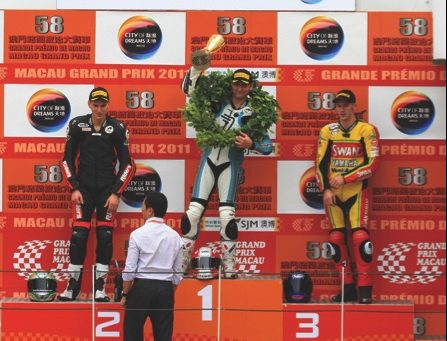 The battle between Rutter and fellow countryman Jefferies gave the latter a new lap record.

And then we reached the 36th edition of the Motorcycle Grand Prix. In an unusual Sunday race (due to a rainy Saturday the day before), Michael Rutter joined the club of triple GP winners.

What followed were three more years of complete supremacy for Rutter, winning the 2003, 2004 and 2005 editions. His four consecutive wins elevated Rutter to rival the achievements of the “Rocket” who had secured six Macau victories.

Then another Brit, Steve Plater, denied Rutter’s fifth consecutive title by winning both editions of 2006 and 2007.

2006 was also the year of the introduction of a new class in the motorcycle race, the Supersport 600 Class, that ran until 2010.

A man on a ‘mission’ and those that stopped him

Plater’s achievements brought the fourth decade to a close, buying the time of another Brit to interrupt the ambitions of Rutter – Stuart Easton – that in a snap showed complete dominance by taking three consecutive wins between 2008 and 2010.

On the year that closed the participation of the 600 Class Joao Fernandes made it to the podium by being third after Frenchman Amaury Baratin and Hong Kong’s Cheung Wai On.

The year of Rutter consecration finally arrived. After a long wait of five years, Rutter came prepared with the best to take the mission very seriously in the Ducati 1198R. 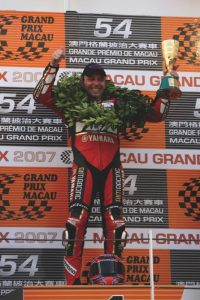 With a dominant win, Rutter became the most successful rider in Macau Motorcycle Grand Prix history by winning his seventh GP and finally breaking the record of Haslam.

Crowned as the “King” of Macau’s two-wheel race, Michael Rutter did not let the achievement blur his vision and he was back on his motorcycle aiming for an eighth win aboard an SMT Honda in 2012.

In a year of not so good memories, the motor sport community suffered from a fatal accident that took the life of Portuguese rider Luis Carreira, which led a few riders to pull out from the race in respect for his memory as well as others that still raced, although in a mourning mood.

Rutter was in winning form, setting the fastest times in both qualifying sessions.

Due to the rain that fell on Saturday, the race was once more pushed to Sunday as the last event of the Grand Prix.

Run under lowlight, Rutter made use of his broad experience and took home another win, extending his lead in the GP Hall of Fame.

Returning in 2014 after a three-year absence was Stuart Easton and, once more he was unbeatable. This made it four wins in four races.

Closing the fifth decade, a surprise by Peter Hickman, the 28-year-old, who showed a stellar performance during the race. Coming from third on the grid he took the lead around halfway through the race and never let go, finishing with a lead of 6.3 seconds over Martin Jessop. 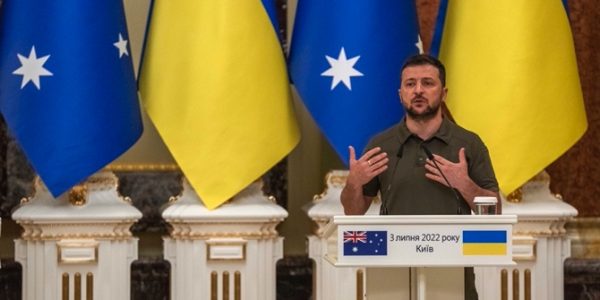 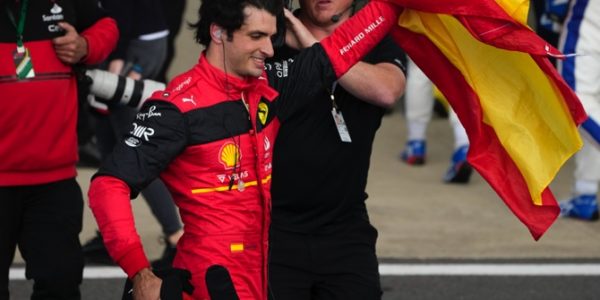 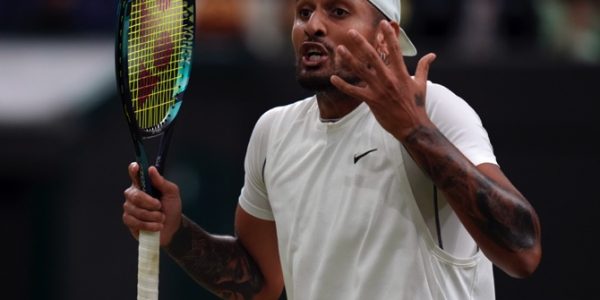 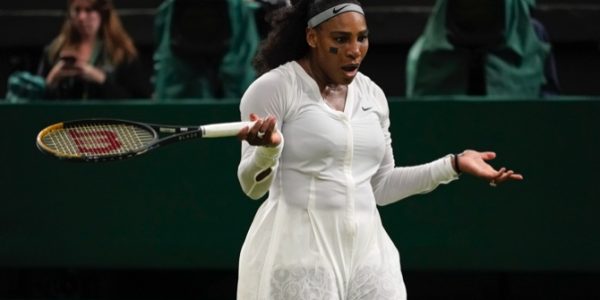 Serena Williams loses at Wimbledon in 1st match in a year