Golf | Analysis: Tiger’s story is getting old, yet he keeps repeating it 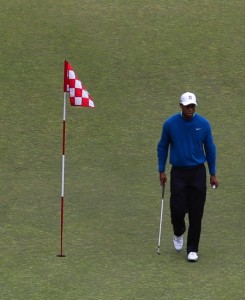 Tiger Woods walks past the flag as he practices

The questions come less often, largely because the story is getting old. Or maybe it’s just that no one really believes anymore, even Tiger Woods himself.
The downfall of the greatest player of his time can be measured in any number of ways, whether it’s his current ranking of 195th in the world or the 85 Woods shot just a few weeks ago in a Memorial tournament he has won five times.
One of the most telling, though, may have come on Tuesday from the youngest player in the U.S. Open, a 15-year-old from Texas named Cole Hammer, who said his first memory of watching golf on television was watching Woods pump his fist after forcing a playoff he would eventually win at Torrey Pines.
It’s been seven long years since Woods won that Open, and now even the bookies in Las Vegas can’t make the odds long enough on his chances of winning this one. He’s a 50-1 pick, and the bettors who once put money on him to win every tournament now look elsewhere to make their money.
That’s not going to stop Fox from showing his every shot on Thursday in a primetime telecast for which the network paid big money at a time Woods was still relevant. Woods still moves the popularity needle, even if he no longer moves with the confidence of a player who once expected to win every time he teed it up.
What has changed is we watch him not to win, but to see when he crashes. And on a quirky golf course that features trains rumbling through on a regular basis, Woods is a train wreck waiting to happen.
He talked on Tuesday about making progress, said he was getting his game into shape to win the 15th major of his career. He reminded reporters that he’s won three U.S. Opens, as if that should be enough to automatically elevate him to contender status.
But progress for Woods these days is no longer measured by getting closer to where he once was. It’s trying to get farther away from where he is — a player who shockingly still can’t figure out how to do the fundamental things on the golf course he used to take for granted.
Yes, Woods came back to make the cut at the Masters after embarrassing himself with wild play and amateurish chips in his first two tournaments of the season. But, no, he wasn’t in contention on Sunday, as he claimed. Woods was 10 shots behind with as much chance of catching Jordan Spieth as the young Hammer has of winning here at Chambers Bay.
Even more startling is that since returning from a layoff to fix his chipping woes, Woods has finished a collective 57 shots behind the winner in the three tournaments he has played.
“When you look at how I played at Phoenix and Torrey (Pines), I’m sure most people thought I was probably crazy to think I could probably win the Masters,” Woods said. “But I really felt like I could. I had a chance, I just didn’t get it done.”
So Woods remains in denial, which may be the only way he can bring himself to play anymore. Young players with steadier nerves have passed him by, but don’t expect him to acknowledge it.
He’s approaching his 40th birthday in December, a time in every athlete’s life where things are not nearly as easy as they once were.
While Woods insists his problems are all due to swing changes, others aren’t so sure. He split with girlfriend Lindsey Vonn after the Masters, and is helping raise two kids with his ex-wife. Clearly, his life is more complicated than it was when Woods was a young bachelor in his prime.
But mostly he suffers from comparisons with what he’s done before. And Woods was so great during a 12-year span that he can never meet those expectations again.
“We’re just waiting for him to come back and win those tournaments like it was nothing, hunt down people like he was playing a Wednesday tournament at the country club,” Jason Day said. “But will we see it? I’m not sure.”
Not this week, we won’t. And the way Woods continues to search for his game, maybe not ever. Tim Dahlberg, Washington, AP