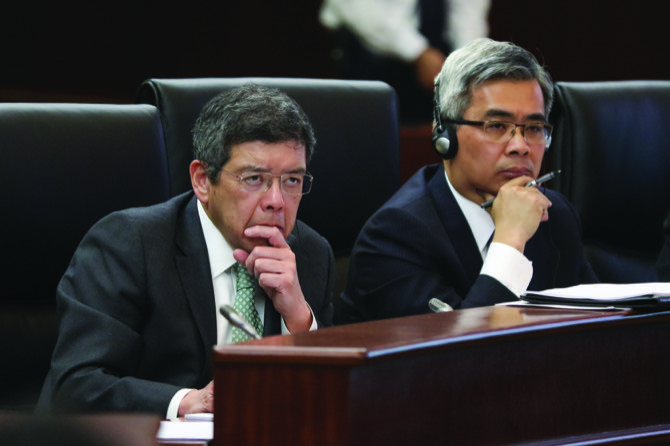 According to local media reports, there are a growing number of voices calling for structural changes at the highest levels of the government. These voices suggest that the current establishment of five secretaries will not be sufficient to handle the changes brought about by the Greater Bay Area plan.

According to news service CLBrief, such tasks will demand from Macau a significant “boost in its administrative capacity to be able to cope with these directives.”

“Over the past 20 years, the city has made giant leaps on all fronts. The territory’s area grew by 29%; GDP shot up by 748%; the population increased by 52%, casino revenue leaped by 2,156%, real estate increased by 463% and government revenue grew by 461%. Despite this boom, the government structure has remained very similar to the one before the handover in 1999,” CLBrief notes.

Among the secretariats allegedly strained by the increased workload resulting from Macau’s development, the Transport and Public Works and Social Affairs and Culture have been highlighted as not having enough staff for the challenges they currently face, let alone those in future.

At the same time, legal experts and legislators believe that the appointment of a new Chief Executive and, consequently a new government could be the right opportunity to increase the number of Secretaries.

Central government officials who visit Macau frequently mention that the city should not miss the “development and modernization train” of the Pearl River Delta region, now transformed into an even larger project under the Greater Bay Area initiative.
The restructuring of the government, at its highest level, could be seen as a leap forward, with community leaders suggesting to increase the number of Secretaries from five to at least seven.

The CLBrief report suggests the government follow the examples of the Secretariats of Security and Administration and Justice, which it says have a structure “that works well.”

As for the previously mentioned, the Secretariat currently led by Raimundo do Rosário will be facing a number of new land reclamation development projects; a complex public transport network; subsidized home-ownership and social housing projects; public tenders for the construction of the fourth bridge and a tunnel linking the peninsula and Taipa; and the management of the Taipa’s Light Rapid Transit (LRT) and its connection to the peninsula.

At the same time, the Secretariat now led by Alexis Tam will face challenges in enhancing the medical facilities of Macau, namely the new Islands Medical Complex construction, which has been delayed several times.

In a few months, Macau will have a new Chief Executive chosen by 400 electors representing associations and organizations across several sectors of Macau.

So far, two Macau politicians are widely understood to be entering the Chief Executive race as in February, though neither has officially confirmed their candidacy. The candidates, Legislative Assembly Chairman Ho Iat Seng and Secretary for Economy and Finance Lionel Leong, both indicated they were considering a bid for Macau’s top job when interviewed by the media.

Known for his family ties with mainland China, Ho is the CEO of the Ho Tin S.A.R.L. Industrial Society, one of the oldest companies in Macau.

As for Leong, he is a leading member of the Macau Industrial, Commercial and Importers and Exporters Association, and a former member of the National People’s Congress in Beijing.

Prior to assuming his duties as Secretary for Economy and Finance in 2014, Lionel Leong was CEO of the industrial laundry company, Smartable Holdings Limited.

Leong’s family was reportedly linked to the New Democracy Movement of Macau in the 1940-50s, which was the precursor of the founding of the Macao Daily News newspaper.
MDT/MacauNews