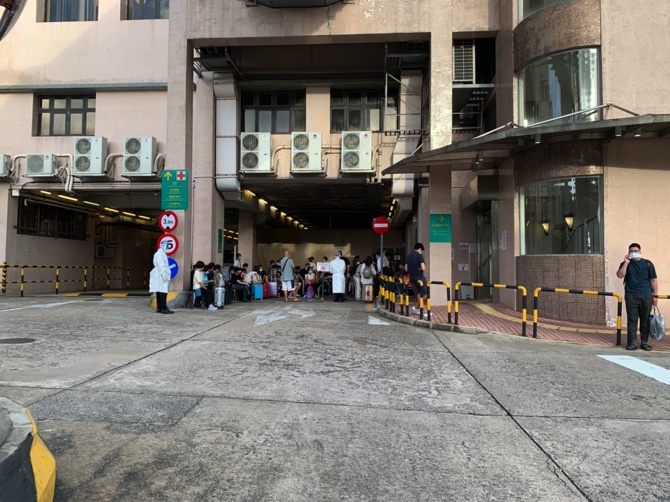 Community zero-Covid, in summary, is the goal of cutting off all transmission links within the general public, pulmonologist Alvis Lo, director of the Health Bureau (SSM), explained yesterday.

In the past couple of days, government officials, including Chief Executive Ho Iat Seng himself, have started using the term with increased frequency. Some people on social media have expressed unfamiliarity with the term.

In response to a question by the Times on the definition, Lo explained that the core meaning of the term centers around whether a positive case, when detected, is among the public or has been brought under control.

“Under control,” the medical doctor further explained, refers to whether the person is in medical or observational quarantine. The location can be a building in a red zone, a quarantine hotel or a medical facility.

If the positive case is detected while in quarantine, it will not affect the “community zero-Covid” target, because the case is not active within the community. The resulting infection will also pose low transmission risk.

On the other hand, if the case is found within the community, “we will have to assume a chain of infection exists,” Lo said.

He added that, during the early phase of an outbreak, there will be many cases in the community. However, as more positive cases are placed in quarantine, the number will gradually drop.

“This is why we want to cut off the chain of transmission as soon as possible,” Lo concluded.

Yesterday, the CE took some time during his own press conference to urge calm, saying that although the virus is spreading fast, this variant is not as impactful on health as other variants.

However, the government’s reaction and performance in the past week has led to different perceptions. Mild panic buying of necessities and claims that Macau would enter a complete lockdown were seen online and offline.

When questioned about whether the measures imposed contradicted the government’s assurances, Lo urged people to not be overly worried. The best action, in his opinion, is to stop crowds gathering. “It will massively [benefit] the control of this current outbreak,” the medical doctor added.

On the question of whether citywide SARS-CoV-2 nucleic acid test (NAT) and rapid antigen testing (RAT) will become regular features, the medical doctor said that the SSM has prepared many contingencies and measures.

“On whether, when and the order in which they will be implemented, we will need to rely on the latest data [before making a decision],” the medical doctor remarked. “Our measures have succeeded in detecting positive cases.”

He also applauded local people for growing accustomed to the citywide NAT, “because, as per our data, progress has been smooth so far,” the medical doctor said. He added that the question of whether there will be further rounds of citywide NAT or RAT will be determined by the results of the current NAT round, set to end midnight on June 25.

Lo confirmed, in reply to a question, that all cases have contracted the BA.5.1 viral strain.