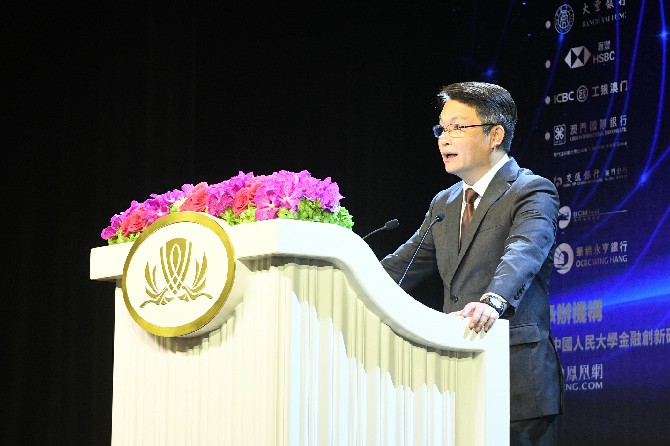 Secretary for Economy and Finance Lei Wai Nong pledged in the Guangdong-Hong Kong-Macao Greater Bay Area (GBA) Finance Forum on June 11 that the Macau SAR government is striving for free cross-border money flow and investment facilitation policies, in order to foster financial cooperation with the mainland partnering regions.
Free capital flow between Macau and the mainland itself provides as a solid financial foundation to assist various industries from both sides to gain ground, Lei said.
To this end, Lei confirmed that the government would continue to liaise with financial ministries of the Central Government to make these measures happen.
He unveiled the government’s strategic undertakings last Friday at the GBA Financial Forum held at Wynn Palace.
Lei also outlined a set of national development directions stipulated in China’s 14th Five-Year Plan (2021-2025), including the “dual circulation” development pattern. In this strategy, the domestic economic cycle plays a steering role while the international economic cycle remains an extension and supplement to forge a synergy to propel the nation’s economy.
Developing the Guangdong-Macao Intensive Cooperation Zone in Hengqin is another key strategic focus, he added.
“The Guangdong-Macao Intensive Cooperation Zone in Hengqin is a crucial gateway for Macau to integrate into the development of the GBA. President Xi Jinping asked Guangdong Province and Macau to robustly facilitate the construction of cooperation zones, carving out conditions for the development of emerging industries and furthering the city’s economic diversification,” he outlined for the audience.
Yao Jian, deputy director of the Liaison Office of the Central People’s Government in the Macau Special Administrative Region also spoke at the event.
Yao stated that the Guangdong-
Macao Intensive Cooperation Zone in Hengqin will offer an extended platform for Macau to integrate more closely into the nation’s development.
Macau is now at the transition period of economic recovery. The government will narrow in on developing the health, modern financial, technological and cultural industries to reshape the city’s economic structure, Lei said.
The government is also enhancing the city’s financial and legal infrastructures so as to speed up, with the help of financial technologies, the development of key markets, such as the bond and wealth management markets. The move is designed to “progressively enrich Macau’s financial industry, and provide various financing channels for different emerging industries,” he stressed.
This year’s GBA Finance Forum was in its second edition. It was organized by the Macau Association of Banks.