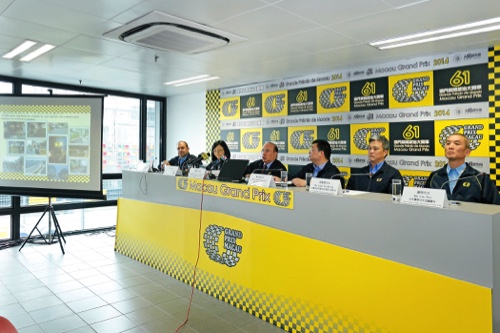 Macau Grand Prix Committee coordinator Costa Antunes revealed that this year’s sale of Grand Prix tickets has exceeded expectations, with tickets for the main stand already sold out. The organizer of the 61st Macau Grand Prix has also predicted that the event will attract more people to Macau this year.
Mr Costa Antunes said that the earnings from ticket sales this year are already 20 percent higher than two years ago. However, he still cannot provide a final figure, since sales are ongoing.
“We have already reached the limit at the main stand. [But] there are more tickets to sell. We have a few [for the stand] at the Lisboa corner and some at the Reservoir,” he said.
The GP coordinator spoke to the media on the sidelines of a joint-department press conference held yesterday to outline the traffic arrangements related to the event.
The Transport Bureau (DSAT) deputy director Chiang Ngoc Vai said that this year’s traffic conditions during the Grand Prix period, from November 13-16, would be even more challenging than in 2013. The Macau government has also sped up the road works on major arteries, and will suspend some of them during the GP period.
“During the Macau GP, some of the major traffic arteries in Macau will be temporarily closed. The major traffic flow from the northern districts to the central and the southern districts will concentrate at the area near Avenida do Coronel Mesquita, Avenida de Horta e Costa, Avenida do Ouvidor Arriaga, Rua de Francisco Xavier Pereira and Avenida de Sidónio Pais. Given that the amount of vehicles in Macau has exceeded 236,000, it can be anticipated that the relevant avenues will be overloaded. The traffic will be even more challenging than last year,” he said.
Moreover, Mr Chiang said that the government has already hastened the progress of road works on major traffic arteries. “There are approximately 16 road projects [in progress] that involve major roads. They include those at Rua de Francisco Xavier Pereira, Avenida de Sidónio Pais, Avenida da Praia Grande, Avenida do Almirante Lacerda, etc. We estimate that these projects can be finished before November 10 when the GP begins,” he said. As for projects that cannot be completed before November 10, which could considerably impact traffic, the administration has decided to suspend them and allow traffic to briefly resume during the GP period.
Chiang Ngoc Vai also reiterated that the traffic conditions during the GP period depend on the residents. “The fact is, if more people choose to drive [during the GP], the traffic conditions will be even more challenging. If more people opted for walking or taking public transportation, the pressure on the road will then be eased,” he said.
Meanwhile, Costa Antunes said that, over the four racing days, the racetrack will close at 3 a.m. until all races of the day have been completed. He has reminded residents to pay attention to the Committee’s road-
closing schedules, published in newspapers, as well as the reports of local radio and television stations.
Mr Costa Antunes expects the removal of GP safety barriers to finish on November 27.