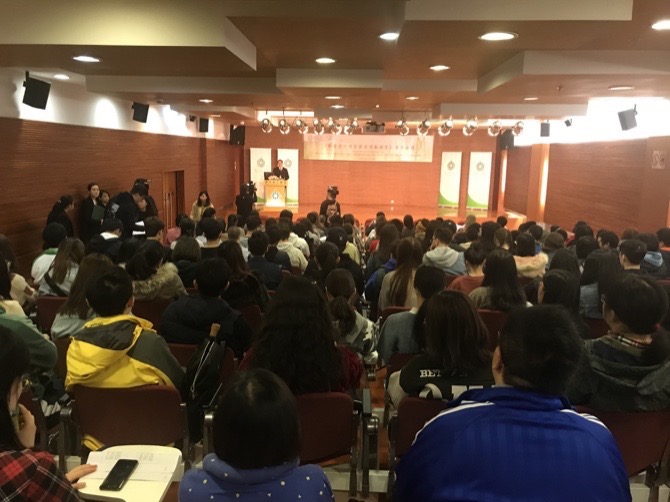 A speaker during the Macao Polytechnic Institute’s (IPM) forum on youth policy in the Greater Bay Area said that the initiative is poised to encourage young people in Macau to relocate to Guangdong province.

The speaker was Loi Hoi Ngan, associate professor at the Social, Economic and Public Policy Research Center of IPM.

“The Macau youth born and raised in Macau might think that there is no need for them to go out [to Guangdong]. But, even if you don’t go out, the future will affect you because the Greater Bay will become one market,” said Loi at yesterday’s forum, which was attended by more than 150 of the institution’s students. “Capital, technology and labor will flow increasingly smoothly in it.”

“Even if you don’t go to [Guangdong], there will be many other specialists [from the mainland] coming to Macau to seek out opportunities,” added Loi.

Despite Loi’s enthusiasm and high expectations for the Greater Bay Area, only one forum attendee raised his hand when the audience was asked if they were interested in relocating.

Moreover, none of the IPM students who were at yesterday’s forum had read the Outline Development Plan for the Greater Bay Area, when Loi asked the question.

In Loi’s opinion, Macau has already taken a large number of protective measures for local residents’ employment. However, he hopes that the city can increase the competencies of Macau locals to better prepare them for future competition.

Besides Loi, another speaker, the vice-president of IPM, Lei Ngan Lin, also told the media that the university will launch other relevant measures and strategies to push forward the development of and cooperation in the Greater Bay.

Recently, the school signed a knowledge exchange agreement in conjunction with several universities in the Greater Bay Area.

The institute also plans to launch a Chinese-Portuguese translation machine next month.

“Next month, periodical research results will be announced. We hope that the research can solve Chinese-Portuguese translation problems which we have encountered in the Greater Bay Area,” said Lei.