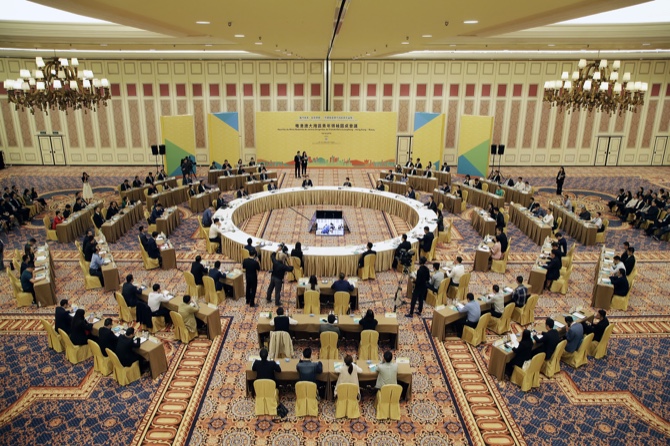 The five parallel sessions of the “Youth Forum on Jointly Building the Guangdong-Hong Kong-Macau Greater Bay Area” were held simultaneously on Saturday, with topics related to the legal systems of the Greater Bay Area; innovation, entrepreneurship and employment; social security; cultural exchanges and cooperation; and transport connectivity.

The five secretaries of the local government attended these sessions to exchange views with youth representatives from the Greater Bay Area and discuss the opportunities and challenges of multi-disciplinary collaboration.

The Secretary for Administration and Justice Sonia Chan said in her session that the “one country, two systems” policy is the main advantage of the Greater Bay Area, as compared to other bay areas, though she also admitted that one of the foremost challenges to the formation of the Greater Bay Area are the different social and legal systems, according to a statement from the Macau government.

Chan also expressed her hope that interactions and exchanges could enhance young people’s knowledge of the legal systems of the Greater Bay Area, so that they can be well equipped to seize the opportunities arising from regional integration.

Meanwhile, Secretary for Economy and Finance Lionel Leong used his speech to encourage young people to “maintain self-confidence and ability for employment and developing businesses, broaden their international perspective, keep up-to-date regarding the development of the nation, and be well equipped with innovative thinking and skills.”

According to the government statement, he also said that the government will take a more proactive role in training young people to engage in the economic opportunities of the Greater Bay Area.

Secretary for Security Wong Sio Chak said that the Greater Bay Area would bring about new challenges to social security. In addition to inter-city police cooperation, Wong called for cooperation between community organizations and residents in order to maintain the security of the region.

Secretary for Social Affairs and Culture Alexis Tam said that the Greater Bay Area is “rich in cultural heritage, with unlimited vitality and potential,” according to the government statement.

Secretary Tam stressed that the Macau government is committed to promoting youth exchange in the Greater Bay Area, especially mutual learning concerning culture and creativity. It is hoped that such exchanges will contribute to the nourishment of talented individuals who hold “a sense of patriotism and social responsibility.”

The Secretary for Transport and Public Works Raimundo do Rosário pledged that the local government would press ahead with infrastructure connectivity regarding a one-hour commuting radius. The efforts mentioned by Rosário include building a new Guangdong-Macau crossing checkpoint and exploring the possibility of accessing railway networks on the mainland.