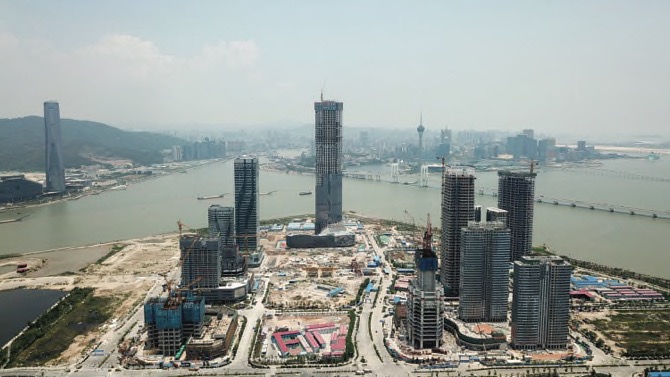 This May 23, 2018 photo shows the Hengqin New Area under construction

Guangdong will compile an intercity railway construction plan for the Greater Bay Area, according to a report by Macao Daily News, which will link the major municipalities of the region in a one-hour transportation cycle.

The Director of Guangdong Provincial Development and Reform Commission, Ge Wei, revealed that the province will implement the plan in order to realize the “one-hour traffic circle” inside the Greater Bay Area. The project will also help to integrate the circle into the national rapid transportation network.

The one-hour circle inside the Greater Bay connects to the railway network, the Hong Kong-Zhuhai-Macau Bridge and the expressway in Guangdong, which shortens traffic time to approximately one hour between some of the Bay cities.

The Macau government has previously stated that the city’s Light Rapid Transit network will have an extension to the future Hengqin border gate.

However, according to the mainland railway authority, a Hengqin railway station will open later this year. It has been reported that the Hengqin train station will be integrated with the future Zhuhai- Macau border gate in Hengqin, after the Cotai checkpoint’s relocation to the island.

Previously, the local government announced that mainland and local authorities had reached a preliminary consensus regarding the Cotai checkpoint relocation. According to this consensus, the Macau Cotai port will be relocated to Hengqin, which means the frontier will be situated on the Zhuhai side.

It is expected that passengers will be able to complete immigration procedures for crossing the border between Zhuhai and Macau without leaving either the Hengqin train station or the Macau LRT Hengqin station.

AN overnight high-speed train linking Zhuhai with Beijing, which takes 11 hours and 41 minutes to arrive at its destination, is one of the newer transportation infrastructure improvements in the region.

The train operates every Friday, Saturday, Sunday and Monday. It is an overnight train that departs Zhuhai at 7:10 p.m. and arrives at Beijing West at 6:51 a.m. the next day.

The train stops at Zhongshan, Guangzhou, Changsha, Shi Jiazhuang, and Zhuozhou before it arrives in Beijing.

Only second class seats and ‘still lie’ options are available on the train, with fares of RMB779 and RMB1,290 respectively. JZ