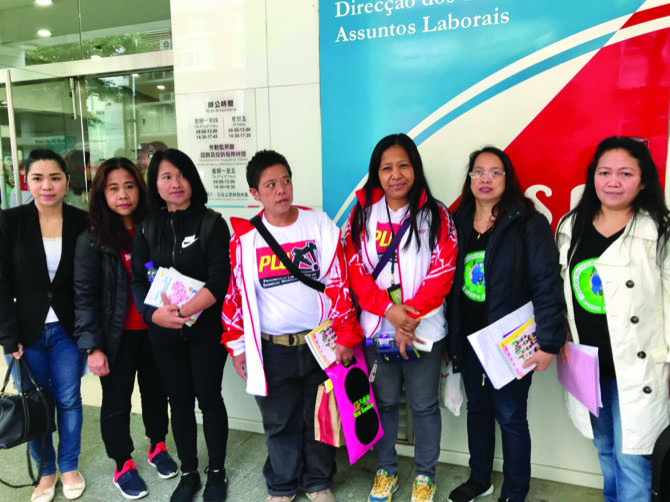 SEVERAL groups of migrant workers gathered yesterday at the Labor Affairs Bureau (DSAL) calling for a review of policies on domestic workers including an outdated housing allowance and requesting a review of the minimum wage proposal.

This was the first time that Filipino and Indonesian migrant groups organized a meeting with an official government department – which took the group some four months to finalize.

Although the preparations took place over some 12 months, the groups expressed dissatisfaction with the outcome of the meeting, noting that officials responded to the migrants’ concerns by quoting current laws on imported labor.

Following the outcome of yesterday’s meeting, the migrant groups will continue to lobby for their rights – starting off with collecting signatures from their fellow workers and handing a petition to local legislators.

The groups stated that they “strongly condemn the slavery- like conditions” faced by some domestic workers in the region, as several issues have not been addressed despite their continuous calls.

“Regarding the meeting, we are half satisfied and half dissatisfied. Half satisfied because they gave us time to [listen] to our grievances, problems and requests. Hopefully, it won’t be the last time,” said Benedicta Palcon, chairperson of Greens Philippines Migrant Workers Union.

In the letter addressed to Chief Executive Chui Sai On, migrant groups listed a total of 12 items that they believe are in need of review. These include the need to institute a standard contract that clearly defines labor standards in the city, a minimum wage of MOP4,500, and an increase in the outdated housing allowance from MOP500 to MOP1,000.

The city’s required housing allowance for non-resident workers was established back in 2004 and has not been reviewed for a decade and a half.

The migrant groups also called for a review of the six months ban on migrant workers whose previous employment had been terminated, and requested that the bureau monitor agency fees to ensure that these agencies follow the law.

According to Palcon, the groups have gathered over 3,000 signatures for the petition and are planning to gather more before they hand the letter to the CE.

The meeting, which lasted over two hours, was attended by deputy director of the DSAL Ng Wai Han and head of the bureau’s Labor Inspection Department Kenny Lai.

“We want them to know that we’re very serious about this. They said they will consider what we suggested and about the agency fees; they said they will monitor in the future,” said Jassy Santos, chairperson of the Progressive Labor Union of Domestic Workers.

“Workers are not consulted about the agency fees, [so] we said that if they are going to listen and consult us as well, we could probably help [each other],” Santos added.

Questioned on whether the bureau had responded to their request for a minimum wage, both Palcon and Santos said that, according to DSAL, they could not set a minimum wage yet as they follow a certain market level for each industry and employer, given the wide range of salaries.

“It depends on the situation of the employer so they set our salaries on that,” said Palcon.

In 2017, the CE pledged that the universal minimum wage would become a reality in 2019, noting that it is one of the administration’s priorities and objectives.

However, the migrant groups doubted such a promise.

“They [DSAL] will try to tackle and discuss but there’s no such thing. They will not. They have a measurement for the employer. They don’t believe that there are workers who have salaries of MOP2,600 to MOP2,800,” said Santos.

“I am not satisfied at some point. We were there to give ideas of what’s happening outside but instead, they talked about laws that [we already know]. We need a decent life as domestic workers,” Santos     added.

For now, the migrant groups will continue to call for their basic rights as domestic workers and will wait for an update from the DSAL.

According to the groups, DSAL pledged that the parties would work to set another meeting.

The International Domestic Workers Federation (Hong Kong) believes that the absence of an official union groups for migrant workers remains a setback for non-residents’ – particularly domestic workers’ – conditions in the SAR.

Fish Ip, Regional Coordinator (Asia) of the federation supported the closed-door meeting of the migrant groups with the Labor Affairs Bureau yesterday, describing the event as “historical.”

Speaking to the press on the sidelines of the event, Ip remarked, “if you don’t recognize these associations, there will be problems when you have these new policies and you don’t know what’s happening.”

“It will be the government and society that will reap the consequences […] there can be serious abuse coming out. There should also be a renewal on this [policy] in regards to the formation of unions. [They should] allow migrants to form these unions so they can have representation,” Ip added.

According to Ip, Macau should take note of the International Labor Organization’s Convention 189, and ratify the convention.

“The workers’ voice must be heard. […] This is a basic requirement for all governments in the world. Then they [should] design their polices and laws [with] reference [to the] convention on domestic workers to ensure that workers are protected and not abused,” said Ip.

Ip was referring to the six-month ban as well as the eight-day visa being granted to an employee who wished to resign without finishing a work contract. LV