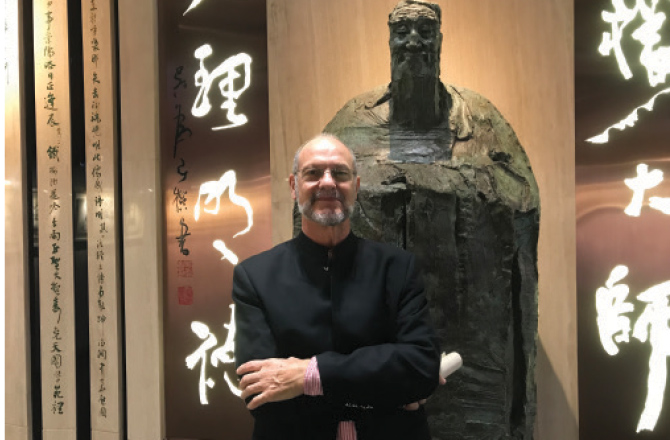 Interest in Macau-related history is growing in several parts of the world, Rui Lourido, the president of the Observatory for China, told the Times.

The Portuguese scholar has recently lectured at Queens College and Brown University in the US, where he fielded questions about the Silk Road, its relationship with the Belt and Road initiative, and the links between Macau and the Portuguese-speaking countries.

“There is a lot of interest because there was a huge English community in Macau during the 19th century and in the beginning of the 20th century. Hong Kong also developed incommensurably compared with Macau. Scholars view Macau as a contact point with Canton and the Pearl River,” said Lourido, who was in Macau give several lectures.  He added that there are also several recent master’s theses and doctoral dissertations related to these topics in Macau.

Established in 2005, the Observatory for China focuses on multidisciplinary studies related to China. Together with the Portuguese National Library, it is currently setting up a digital library of literature on Macau and China, which contains around 200,000 pages of books published between the 16th and the 19th centuries. The library is stored on computer servers provided by the Portuguese National Library. The complete books, most of them written in Portuguese, are being made available for download.

“The collection is not an accumulation of quotes. It consists of complete books, cover-to-cover,” explained Lourido, adding that many of the digitized works are rare original editions and not the modern editions of the same books. “It is a research tool to support universities and simultaneously to help students attending masters’ and doctoral courses.”

Lourido, who is also the director of the Union of Capital Cities of Portuguese Language (UCCLA), says that a key project for Observatory for China next year is the launch of a trilingual version (Chinese, Portuguese and English) of the book “Maritime Journals (Hailu)”.

The book was written by Chinese adventurer Xie Qinggao, who traveled to Europe – likely aboard a Portuguese ship – and stayed overseas for 14 years, during which he visited the main harbors of Europe, America and Asia. Xie eventually returned to China and lived in Macau, where he died in 1822.

“He travelled through the Portuguese maritime route and he had a huge impact here in the 19th century, during a time when China was being threatened by Britain,” Lourido said, adding that a University of Macau student is writing a PhD thesis about Xie’s book, which is currently only available in Chinese.

In May, a puppet theater group from Yangzhou will visit Portugal and take part in an international puppet festival in the city of Évora, among other shows.

In June, there will be a conference at the prestigious Gulbernkian Foundation in Lisbon, focusing on the historical relationship between Portugal and China. Scholars from Beijing, Macau and Guangzhou are expected to attend.  A Cantonese opera group will also visit Portugal later in the year.

Gambling profits ‘must be reinvested’

“Macau can’t stop with the gaming industry, which is important for its sustainability. But the profit generated by gambling must be increasingly reinvested in the creative industries […] and in education, transforming Macau into an educational platform between China and the Lusophone countries,” said Rui Lourido, adding that “culture must be a priority” for the region.  Questioned about the role of the newly opened Hong Kong-Zhuhai-Macau Bridge in the process of regional integration, Lourido said it was “an opportunity” to potentially enhance Macau’s international visibility. However, he added that the excessive control of people’s movements, as seen in the current operation of the bridge, is prejudicial. “China controls because of its superstructure. They don’t need to control movements so tightly.”

During an interview with the Times at the Macau Polytechnic Institute, Rui Lourido was asked to comment on the parallels and differences between the Belt and Road initiative and the ancient Chinese Silk Road.

“There is continuity and rupture. The essential dynamic is continuity, meaning to look at the commerce as a way to enrich the participants […] the rupture project is a new vision to build peace in the world. Many countries in the corridor that links China to the West are highly unstable politically,” he said.

Lourido contends that Beijing is fostering the peace by helping to build infrastructure that is essential to the development of those countries, although the effort “naturally has the main aim of having China being able to access natural resources and foreign funds.”

What Lourido finds “radically different” in the Belt and Road initiative is that “China understood that the financial crisis in 2008/2009, created by the US and with implacable repercussions in Europe, meant that the big corporations forced the countries to lose capital in order to save the banks.”

Today, he said, those European countries can no longer react to a new crisis and are forced to give up control of key sectors that are of interest to the multinationals, namely social security, education and health. Beijing, he added, is acting differently, “creating policies to share wealth, whilst maintaining the social role of the elite.”

“Around five years ago, China established minimum wages for cities and villages. It has taken 700 million people out from poverty and created a middle class which will be the largest [in] the world and is currently the [world’s] main consumer of luxury products,” he noted.