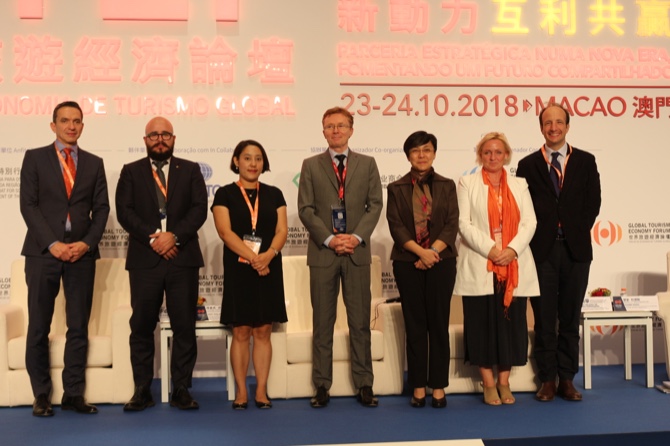 Tourism has transformed from an attraction to an experience and now to an emotion. Thus, tourism entities are aiming to build an “emotional connection” through gastronomy and destinations in their region.

For UNESCO, it highlights that the organization wants to change the phase of travel, considering that perhaps it has evolved too quickly, having too many destinations without experience.

According to a panel yesterday at the Global Tourism Economy Forum (GTEF), empowering local communities is one of the most significant ways to further promote local tourism, gastronomy and culture.

The president of International Gastronomy, Culture, Arts and Tourism (IGCAT), Diane Dodd, said that it is crucial to work with the region’s different sectors to build together its own tourism legacy and to boost building partnerships.

“This is a great way of building momentum within a region, to build pride and cultural food diversity and also to innovate on that and build new experiences,” she said.

“We keep hearing about experiences, but it’s the hardest part for many regions. So we insist on the culture and creative sectors being involved,” Dodd added.

IGCAT works with regional stakeholder consortiums in the fields of gastronomy, culture, arts and tourism, and aims to empower local communities by “guiding, facilitating, and supporting leaders in regions to understand the potential of their distinct food, culture, arts and sustainable tourism assets.”

Dodd also emphasized that the trend among young independent travelers is about being given a unique experience in a region they are visiting, which implies that tourism offices should constantly innovate and provide new experiences including gastronomy, destinations and relationship with locals.

“Empowering local communities is at the essence because we’re realizing that people are becoming detached from traditional knowledge about their food and where it comes from,” said Dodd.

“Promoting cultural and food diversity, and the richness of that and building pride in the citizens again is absolutely essential, and it’s sustainable tourism that is allowing us to do that,” Dodd added.

Since there has been an increase in the number of independent travelers and ‘foodies,’ these sectors are said to become more interested in elements that are described as “unique and distinct.”

“This is helping in the process of rebuilding citizen’s pride in their own food culture,” Dodd explained.

Commenting on the Hong Kong-Zhuhai-Macau Bridge, Dodd noted that the intercultural dialogue between the three regions would boost more travel and exchange.

Yet she warned that people should be careful to balance a globalized food diet with the regions’ local food.

“This is really beautiful but also we also need to take care to innovate because if we don’t make this relevant for contemporary audiences, it will also fail. The young people are happy to have authentic, traditional [cuisines] but they also want the elements of innovation and surprise. And that’s the story they are telling,” Dodd added.

Meanwhile, director of the Macao Government Tourism Office, Maria Helena de Senna Fernandes, echoed the same sentiments, adding that it aims for all sectors in the region to move forward by combining gastronomy.

“Coming into the future, it’s very important to keep the momentum going and […] we want to actually focus people’s attention on what food has to do with our normal ways of life and really get people thinking about it, [which] also helps to preserve our culture.”