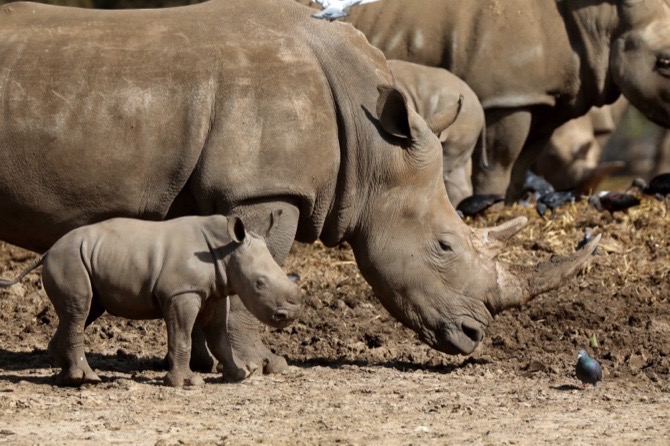 A baby white rhinoceros met with the public in Guangzhou, capital of southern China’s Guangdong Province.

The park started to introduce rhinoceros from South Africa since 1997. Now the park has 24 southern white rhinoceros and 13 black rhinoceros.

Da Zhuang was born on June 19 last year while his father Little Prince was born on March 3 in 2009. Da Zhuang’s mother, named Nan Feng, was introduced from South Africa in 2015.

Nine months after his birth, Da Zhuang now weighs 445 kg, while he only weighed 48 kg when he was born, said Chen Siming, an animal expert with the park.

“Da Zhuang is now learning survival skills with his mother such as looking for food, mud bathing, rubbing and scratching, as well as how to get along with other rhinoceros,” Chen said.

“The special body structure and the low fertility rate of the white rhinoceros make it difficult for the species’ population to increase,” Chen said.

Experts at the park have made a lot of efforts to help the species mate and reproduce in recent years, and two other white rhinoceros are pregnant and the babies are expected to be born in November this year and the first half of 2020 respectively, the park said. MDT/Xinhua