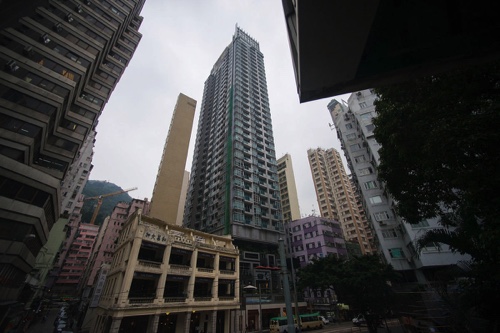 There’s a grim phenomenon in Hong Kong’s real estate market: discounts of as much as 50 percent for home-seekers willing to live in an apartment where a murder has occurred.
Unnatural deaths typically result in rental discounts of 10 percent to 20 percent and can be more than double that for sinister killings, according to Sammy Po, head of the residential department of realtor Midland Holdings Ltd. Chinese believe such places, known as “hung jaak,” the Cantonese term for “haunted apartments,” are unlucky, he said.
“The Chinese really do care” about living in these places, Po said.
The rent for a Wan Chai district apartment where police found two women’s bodies on Nov. 1, HK$29,000 (USD3,740) a month at the time of the murders, will probably drop by half when it’s released from being a crime scene, cleaned and rented again, according to a director of the company that owns the unit, who didn’t want his name or firm identified because he isn’t permitted to speak publicly. The sales value of the unit in the luxury J Residence would decline from HK$9 million to HK$6 million if it were sold immediately, the person said.
Hong Kong had almost 190 sites where an unnatural death took place, including murders and suicides, this year, according to a database compiled by Squarefoot.com.hk.
Squarefoot lists the date of the incident, the address, the district and a brief description of the death. Among recent listings were an apartment where an 18-year-old male student slipped a plastic bag over his head last month and jumped to his death; one where a middle-aged couple, plagued by financial troubles, committed suicide by inhaling burning coal smoke; and another where a mother was hacked to death by a mentally unstable neighbor while protecting her two daughters.
Hong Kong is certainly not the only place where home-seekers can be wary of a residence marred by tragedy. Nevertheless, in a comparably high-demand market like New York City, the stigma is less marked, according to Jonathan Miller, president of real estate appraiser Miller Samuel Inc. in Manhattan. Where sales inventory in the city is scarce and rents are near records, a crime or other negative event wouldn’t have much effect on price, he said.
In the U.K., a particularly notorious crime can cause a home to become unsalable, requiring it to be knocked down and rebuilt, said Richard Sexton, a director at e.surv, the country’s largest provider of residential property valuations.
“Equally, if it’s a folklore situation, the U.K. can be different,” he said. “The house with the friendly ghosts can sometimes be marketed that way as a positive.”
Hong Kong property agents aren’t required by law to disclose if a death occurred in a unit, but they should provide information when asked under the industry’s code of ethics, according to the Estate Agents Authority, a government agency. Potential tenants or buyers should ask whether a suicide or homicide took place because there’s no legal definition of a “haunted property,” the agency said in an e-mailed response.
Hong Kong is otherwise Asia’s priciest real estate market. Private residential rents hit a record high in August, reaching almost HK$25 a square foot, or HK$12,500 for a 500-square-foot apartment, according to Midland. Residential sales prices, which have more than doubled since the start of 2009, hit a record last month despite government measures to curb demand.
The city is the world’s most-
expensive after London for multinational companies to base staff because of its real estate, according to property brokerage Savills Plc.
C S Group, a Hong Kong property-services firm, is auctioning a 550-square-foot “hung jaak” on Nov. 18 with a starting price of HK$3.18 million ($410,120), according to its website. An apartment of the same size in the same complex sold last month for almost 27 percent more, or HK$4.33 million, according to data from Midland.
“The demand is there, whether from investors seeking rent or for self use,” said Alger Cheng, general manager of the group’s auction department.
First-time homebuyers are also drawn to these cheaper properties, Midland’s Po said.
Expatriates tend to be less concerned with living in “haunted apartments,” said Asif Ghafoor, founder of property-listing website Spacious.hk.
For them, “location is by far the most important thing,” he said. Michelle Yun  , Bloomberg