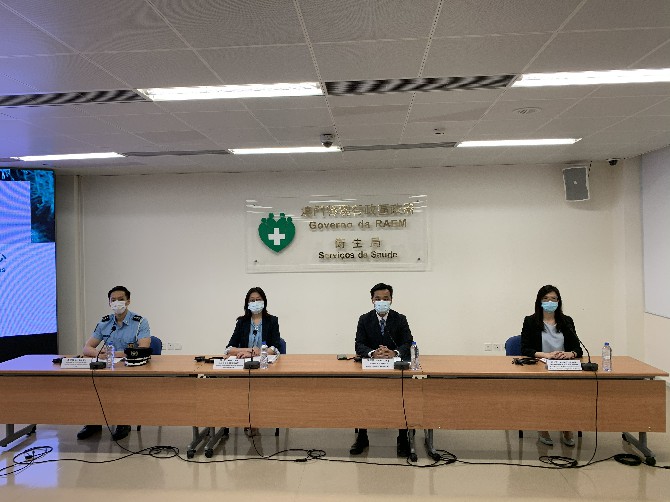 Macau health authorities have taken over treating patients who were formerly receiving medical consultations in other jurisdictions, Alvis Lo Iek Long, clinical director of the public Conde São Januário Hospital stated at yesterday’s Health Bureau regular press conference.
Lo stressed that the public hospital would not and has not denied any patient who had preceding medical consultations in other jurisdictions, such as Hong Kong and Zhuhai, after the implementation of border restrictions due to Covid-19.
Many Macau residents choose to have medical consultations and treatments in other nearby jurisdictions for many reasons. Some do so because their condition was declared incurable by local medical institutions but deemed otherwise by doctors elsewhere. Others may simply be looking for additional advice on their condition.
Recently, the Times became aware that some readers have had to suspend or terminate effective treatments prescribed elsewhere due to the strict border controls. Some have been forced to change to therapies in Macau for the continuation of treatment.
The medical director acknowledged this yesterday, adding that, because of the present border crossing restrictions, many patients have “chosen not to return to medical consultation in nearby places due to the 14-day quarantine requirement.”
Lo said that the health authority has made therapy plans for these patients. He also expressed his happiness at the fact that most of these patients have been able to get “suitable treatments” in Macau.
“Provided that these patients have medical needs, we will attend to their needs in Macau,” the clinical director added.
The clinical director offered a similar response when he was previously asked by the Times whether there would be means to help patients access medications proven to be effective but not accessible here.
Back then, Lo said that from a medical perspective, the treatment of a health condition rarely requires a single remedy.
Yesterday, when asked whether residents could expect a relaxation of border control measures, Lo said that the Macau government has been in negotiations with their counterparts in neighboring regions to secure a practical policy. He added that even the Chief Executive, Ho Iat Seng, has met with his counterparts in Guangdong with regards to epidemic and border control measures.
For the time being, Macau residents can only enter Zhuhai with a negative Covid-19 nucleic test, Green Health Code and a Zhuhai or Zhongshan residence card.
They can only enter Hong Kong on the condition of agreeing to undergo 14 days’ of quarantine following their arrival in the neighboring jurisdiction.
Visitors are only accepted by Macau if they are residents of the greater China region and have not been outside the region 14 days prior to their arrival. Only non-resident workers with residence rights in Zhuhai will be admitted to Macau under certain conditions.
Some social media users have expressed frustration at the local government for not relaxing border controls. The government has reiterated that local people have the right to leave Macau. It is the decision of other jurisdictions whether to accept Macau residents.
With regard to Macau residents needing to attend funerals in Zhuhai or Hong Kong, the Public Security Police Force stressed that they can submit for an exemption from quarantine to Zhuhai authorities for that reason. As for Hong Kong, the local police have not heard about any exemptions being granted.
On the other hand, many are concerned about the reopening of sport facilities. Advice has been provided to the Sports Bureau, said Leong Iek Hou, coordinator of the local Center for Disease Control and Prevention, who also revealed that the reopening is at the bureau’s discretion.