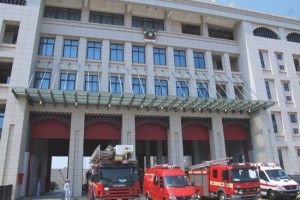 The Hengqin Fire Station located on the University of Macau (UM)’s new campus was inaugurated yesterday after its temporary stationing on the premises since August 2013.
The inauguration marked the 132nd anniversary of the MSAR’s Fire Service Bureau (CB), along with a ceremony awarding firefighters for their rescue operation during the recent large-scale blackout in Macau. A seminar was also held with experts from Beijing, Shanghai, Guangdong, Hong Kong, Taiwan, and Singapore to share experience and advanced knowledge in major fire disaster handling.
The CB Commissioner, Ma Io Weng, pledged at the ceremony that the bureau will speedily launch rescue operations through “studying major accidents that occurred in other regions and formulating a contingency plan suitable for the territory, carrying out systematic training of personnel and purchasing advanced fire-fighting equipment.”
The Hengqin station, mainly catering to the UM campus and covering casino resorts in Cotai, is staffed with 40 firefighters and 12 vehicles, and may increase manpower depending on future need.
According to Ma, firefighters are able to depart within one minute and arrive at a fire scene within 6 minutes over 95 percent of the time. Drawing on the increase in large premises and construction sites in the city, he stressed that the key to preventing alarm and ensuring quick evacuation and rescue is a building’s fire safety facilities and design, as well as holding regular fire drills. BY